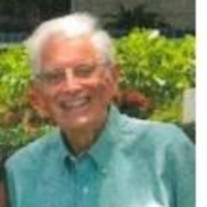 A James Freeman 93, passed away on December 16, 2021, from Alzheimer’s, with his wife, Angela of 51 years by his side. He was born to Alvin and Elinor Ferris Freeman on June 22, 1928, in Norfolk, Massachusetts. A graduate of Northeastern University in Chemical Engineering, he began his career at General Mills. In 1960 he joined Lord Manufacturing Company, now known as Parker Lord, in Erie, Pennsylvania. He retired as CEO in 1993. His first venture internationally was Mexico, then partnerships with Germany and the UK, which led to building plants in Japan, Brazil and China. He served on several boards, Lord, Eriez Magnetics, Erie Press,Van-air, YUSA, Kepro, PNC and FERRO Corporation.He also served on the board of trustees at Saint Vincent Health Center, board of trustees of Mercyhurst University, Erie,PA. United Way, Erie County, awarded him in 1993 the Alexis de Tocqueville. He was an avid bridge player, enjoyed golf and traveled extensively with his wife. He was a member of the Erie Club and Kahkwa Club and present member of The Longboat Key Club, Longboat Key, Florida and Bird Key Yacht Club, Sarasota, FL He was preceded in death by his parents, daughter Leslie Aggelakos, brother David and his sister Priscilla. He is survived by his wife Angela, granddaughter Heather Racchini (Joseph), Nicole Fairfield and five great grandchildren . A memorial service will be at a later date. Contributions may be made to Mercyhurst University, Erie, Pa, or Christ Church of Longboat Key, Longboat Key, Florida or the charity of one's choice.

A James Freeman 93, passed away on December 16, 2021, from Alzheimer&#8217;s, with his wife, Angela of 51 years by his side. He was born to Alvin and Elinor Ferris Freeman on June 22, 1928, in Norfolk, Massachusetts. A graduate of Northeastern... View Obituary & Service Information

The family of A. James Freeman created this Life Tributes page to make it easy to share your memories.

Send flowers to the Freeman family.