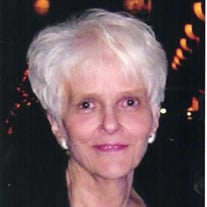 Alice Eleanor Evans Holds of Sarasota died on the morning of January 27, 2022. A devoted Christian, passionate educator, advocate for children, and proud military veteran, Alice adored nature and animals (especially cats), and had a lifelong love of music, movies, and fashion. Born on August 9, 1939 in Pittsburgh, Pennsylvania to David and Mary Evans, Alice spent a happy childhood in Mount Lebanon. She received her Bachelor’s Degree from Westminster College (PA), and her Master’s Degree from Rollins College in Winter Park, Florida. Alice’s career in education began in Sarasota during the first year of classes at Brentwood Elementary, and continued at McIntosh Middle School, Tropical Elementary in Meritt Island, Seven Hills School in Walnut Creek, California, and Immaculate Heart of Mary School in Indianapolis, Indiana. Through the years she earned a reputation as a tireless and imaginative teacher who went above and beyond for her students. Feeling called to serve her country in time of conflict, Alice set teaching aside during the Vietnam War to serve six years as a commissioned naval officer stationed in Newport, Pensacola, San Diego, and Honolulu. She was Assistant Flag Secretary for the Commander, Naval Air Forces Pacific, was Public Affairs & Foreign Officer Liaison for the Commander, Antisubmarine Warfare Forces Pacific, and acted as Public Affairs Officer for an F-8 Crusader fighter squadron at Naval Air Station Miramar (then “Fightertown USA”). Alice and her husband of fifty years, Captain James H. Holds, USN (ret.), spent 1980-1993 in Indianapolis, where she was an active member of multiple organizations, including the Indianapolis Propylaeum, DAR, Second Presbyterian Church and the Salvation Army Auxiliary. Since retiring to Sarasota in 1993, Alice has been active at the Church of the Redeemer as well as in the DAR, Kappa Delta Sorority, and various other local charity organizations. One of Alice’s proudest accomplishments was helping to foster a family of refugees from Kosovo in 1999 who have remained treasured lifelong friends. Alice was the kindest, most loyal, and most loving wife, mother, and grandmother imaginable to her husband James, son Anthony, daughter-in-law Savannah, and two granddaughters, Violet Alice (5) and Luna James (2). They will miss her deeply. A requiem mass will be held for Alice at the Church of the Redeemer in Sarasota at 11:30am on Friday, February 11. An inurnment ceremony with military honors will be held at the Sarasota National Cemetery on Monday, February 14 at 9:30am. In lieu of flowers it is requested that donations be directed to the Church of the Redeemer Episcopal Church in Sarasota or Humane Society of Sarasota County.

The family of Alice Eleanor Evans Holds created this Life Tributes page to make it easy to share your memories.

Alice Eleanor Evans Holds of Sarasota died on the morning of...