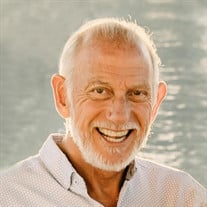 Allan Joseph (Joe) Williams III, born February 6, 1954 in North Tonawanda, New York passed peacefully under vigil and prayers from his immediate family due to sudden heart complications and a preliminary diagnosis to acute myeloid leukemia on March 26, 2022, his father’s birthday. He is survived by his loving wife, Patty, his children, Adam, Jennifer and husband Ron, Kyle and wife Carly, and his grandchildren, Vivienne, Blaise and Lenox. Joe was the youngest of 5 children born to Marian and Allan Joseph Williams Jr. He is survived by Mary Joan, Peter and Kathy and joins Michael in heaven. He grew up in western New York surrounded by his extended family, the Ponterios, Tripodis, Wintermantels and Brunsings. He always valued the relationships with his brothers, sisters, and cousins and instilled that family mentality in all that he did. He graduated from St. Bonaventure University with a Bachelor's of Science in 1976 received his nursing degree from D'Youville College in 1979. He worked in the neonatal unit at Columbia Hospital before following his Uncle Joe “Doc’s” collegiate path to Columbia University School of Dental and Oral Surgery where he graduated with a Doctorate of Dental Surgery (DDS) in 1983. After graduating from dental school, he joined a private practice in Boston, MA where he worked for 3 years before opening his own practice – Center for Cosmetic & Restorative Dentistry – in Nashua, NH which he owned and operated for over 25 years. He was an eternal intellect, student and teacher, mastering the specialty of Implant Cosmetic and Restorative Dentistry through continuing education. He was a Master of the Academy of General Dentistry (MAGD) – an accomplishment bestowed on only 10% of general dentists. He was a member of the American Dental Association, Florida Dental Association, West Coast District Dental Association, Academy of General Dentistry, and the American Academy of Implant Dentistry. He taught dentistry at Tufts University and served on the Dental Board of Examiners. Joe and Patty moved to Florida in 2015, where he had been living his passion of dentistry working at Waterside Dental in Venice. He balanced his work with family and friend time on the links and boat and at restaurants and the symphony. Joe was a man of the people, his life will be honored in the way he lived it – full of laughter and love. His celebration of life will be held at Epiphany Cathedral in Venice Florida on Thursday, April 21, 2022 at 11 AM ET. In lieu of flowers, his family welcomes donations to be made in his name to help other patients and families experiencing this rare and life threatening disease https://gofund.me/d5d056a7. Proceeds will benefit direct recipients of the Leukemia & Lymphoma Society. His family would also like to thank the vigilant team at Tampa General Hospital for the care and compassion they provided.

The family of Allan Joseph (Joe) Williams, III created this Life Tributes page to make it easy to share your memories.