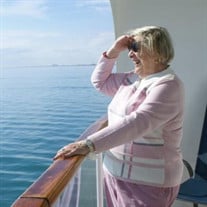 On Wednesday, April 13, 2022, Ann Whitford, loving mother and grandmother passed away at the age of 88. Ann was born February 5, 1934, in Newark, NJ to the late Elizabeth and John Mascuch. Ann, a former pilot with the Civil Air Patrol, received her degrees from Columbia University in English and Philosophy, after living in Bermuda for a number of years as a hotel manager. She later went on to teach high school English in Plainfield, New Jersey, during the Civil Rights Riots. There she began to volunteer with her local teachers Union. In 1970, she became a union pioneer, as the First Female Field Representative/negotiator in New Jersey. Ann worked with NJEA in that role for 15 years, before serving as NJEA’s Associate Director of Research. After retirement, Ann began traveling the world with her late sister Joan Mascuch. The pair cruised around the world, exploring Eurasia. Before settling down in Sarasota, Florida. Ann always made time to visit and travel with her loving daughter Wendy Ann Butera and beloved Son-in-law Mark Butera. She especially loved spending her time and going on adventures with her cherished grandchildren Elizabeth Marie Butera and Peter John Butera. Since Ann was loved by so many, there will be two services held to honor the amazing life she led. On Wednesday, April 20th memorial service will be held in Sarasota, Florida. Visiting hours begin at 12pm followed by a memorial service at 2pm at Toale Brothers Funeral Home located at 40 North Orange Avenue Sarasota, FL 34236 (Phone # 941-955-4171). The Family will be in Florida until April 25th. A second service will be held in New Jersey; prior to interment of her ashes at Hollywood cemetery in Union, New Jersey, more details to follow. In lieu of flowers, we ask that donations be sent to either SPARCC, 2139 Main St, Sarasota, FL 34237 or The World's Central Kitchen, in Ann’s name.

On Wednesday, April 13, 2022, Ann Whitford, loving mother and grandmother passed away at the age of 88. Ann was born February 5, 1934, in Newark, NJ to the late Elizabeth and John Mascuch. Ann, a former pilot with the Civil Air Patrol, received... View Obituary & Service Information

The family of Ann Whitford created this Life Tributes page to make it easy to share your memories.

Send flowers to the Whitford family.