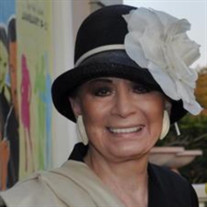 Annette Karpelman Scherman was born on January 14, 1929, in New York City, New York, to parents Maurice William and Rose Karpelman. She died peacefully on April 11, 2022, in Sarasota, Florida, at the age of 93. She was predeceased by brothers Daniel and Hershel Karpelman, sister Lydia Karpelman, husband Norman B. Scherman, husband Robert A. Drohlich, son Andrew M. Scherman, and nephew Daniel Karpelman. She is survived by niece Cookie Anne (Doug) McIntyre, nephew Ross Karpelman, grandnephews Joel (Ericka) McIntyre and Benjamin (Jasmine) Karpelman, grandnieces Rachel McIntyre and Jordan McIntyre, great-grandnieces Madeline and Mila McIntyre, and son’s partner Diane Drutowski. Annette began her career at the age of 13 as a radio performer in New York. She taught creative dramatics, acted in theater, and produced and directed plays in New York, Washington, and the American Virgin Islands. She performed in a nightclub act called “The Five of Us.” Also, an inventor and entrepreneur, she created the “Anyway Top,” a garment that could be worn 132 different ways. Annette moved to Sarasota, Florida, in 1975, immediately joined several community groups, and instituted the area’s first women’s tennis tournament. “Conversations with Annette,” her radio show with a focus on arts and entertainment, began in 1976 on WQSA. This eventually evolved into “Conversations” and then “Community” on public television, continuing until 2020. Community Video Archives was created and founded by Annette in 1991 to preserve and document the Sarasota community’s history for future generations. Every year until 2019, several people were inducted into the Hall of Fame at a luncheon and had biographical videos made about their lives and work in the community. Annette started her signature look on a bad hair day in 1999 with an impromptu decision to wear a hat for a television show taping. Viewers loved it, and it was a valuable attention-grabber, so Annette never again had to worry about doing her hair. Annette also participated in many other Sarasota area organizations and was valued and loved by family, friends, and volunteers. A celebration of Annette’s life will be held for friends and family in the fall. Donations in honor of Annette may be made to the Cyesis Parenting Students Program at Riverview High School c/o rhsfoundation.org/donate-now.

Annette Karpelman Scherman was born on January 14, 1929, in New York City, New York, to parents Maurice William and Rose Karpelman. She died peacefully on April 11, 2022, in Sarasota, Florida, at the age of 93. She was predeceased by brothers... View Obituary & Service Information

The family of Annette Karpelman Scherman created this Life Tributes page to make it easy to share your memories.

Send flowers to the Scherman family.