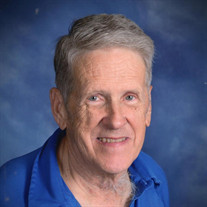 On August 12, 2020, Anson Raymond passed away peacefully. He was born in 1945 in Washington, D.C. to Anson and Marian Raymond. After moving a couple of times while his father was in the Army, the family moved to White Plains, NY. At age 7, he survived polio and went on to become an avid fisherman, reader and enthusiast of building model airplanes. He later graduated with a BA in History from Westminster College in New Wilmington, PA. While there he was part of the founding members of Theta Chi fraternity. He later earned an MS in Education from the State University of NY, New Paltz and an MA in Librarianship for the University of Denver. After several years of teaching history in New York and Kansas, he moved to Florida to pursue his love of books and started working as a librarian at Sunland in Ft. Myers. In 1982, he married Bernice Fisher and later they both transferred to G. P. Wood where he worked as a librarian. Throughout this time, following active duty in the Air Force after college, Anson remained in the Air Force Reserves and after 35 years starting as an Airman, he retired as a Lt. Colonel. Cited from his Defense Meritorious Service Medal, “As the foremost expert on Special Operations Forces (SOF) in the European theater, he served as liaison between United Special Forces in Europe and the North Atlantic Treaty Organization counterparts for operations in Bosnia and Kosovo which provided key support in Operations ENDURING AND IRAQI FREEDOM.” In retirement he was active with the Desoto County library, the Desoto County Literacy Council, and Trinity United Methodist Church where he volunteered with the AWANA program and was a trustee. His memorial service will be at Trinity UMC at 10 am on September 5. A graveside service will be held on Friday, September 11th, at 11:30am, at Sarasota National Cemetery. He is survived by his wife Bernice and his sister Janice. In lieu of flowers, contributions may be sent to Desoto County Literacy Council, 310 W. Whidden St, Arcadia, FL 34266 or AWANA, Trinity UMC, 304 W. Oak St, Arcadia, FL 34266.

On August 12, 2020, Anson Raymond passed away peacefully. He was born in 1945 in Washington, D.C. to Anson and Marian Raymond. After moving a couple of times while his father was in the Army, the family moved to White Plains, NY. At age 7,... View Obituary & Service Information

The family of Anson G. Raymond, Jr. created this Life Tributes page to make it easy to share your memories.

Send flowers to the Raymond, family.