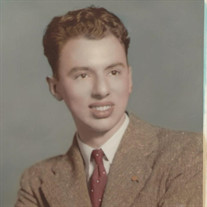 Anthony “Tony” Richard Gringeri, 97, of Lighthouse Point, FL, passed away peacefully on February 19, 2021 in the loving care of family members and hospice staff. Tony was born on September 13, 1923 in Philadelphia, PA, to Louis and Florence (Tropea) Gringeri. In January 1943, Tony enlisted in the United States Navy, where he served on the destroyer, the USS Johnston. He was on board in the Battle of Leyte Gulf, a pivotal World War II battle, and the largest naval battle in history. The USS Johnston was attacked and sunk on October 25, 1944. Tony survived over fifty hours at sea with his shipmates before their rescue. He then served on the USS Houston, completing his service in February 1946. In recognition of his bravery, Tony received the Purple Heart and other medals. Supported by the GI Bill, Tony earned BA and MA degrees in English from La Salle College and the University of Pennsylvania. In 1949, he married the love of his life, Yolanda Condemi; they later moved with their family of seven children from Philadelphia to Natick, MA. Throughout his professional career as a technical editor, Tony worked for several computer companies including Honeywell and Digital Equipment Corp. Tony and Yolanda retired to Pompano Beach, FL in 1991, eventually moving to nearby Lighthouse Point. During his long retirement, Tony was an active member of St. Nicholas Episcopal Church and its ministries; as a lifelong, avid reader, he enjoyed the Lighthouse Point Library Book Club. Tony is survived by his children, Richard Gringeri of Salvador, Brazil; Mary Gringeri of Tucson, AZ; Mark Gringeri and his wife Noelene (Toews) of San Jose, CA; Frank Gringeri and his wife Lori Tumpowsky of West Haven, VT; Christina Gringeri and her husband, Armando Solorzano of Salt Lake City, UT; and Elizabeth Gringeri and her husband, William Crump of Sarasota, FL; and his brother, Louis Gringeri of Warminster, PA. He also leaves ten grandchildren, thirteen great grandchildren, and many nieces and nephews. He was predeceased by his wife, Yolanda; his son Louis Gringeri of Natick, MA; his brother, John Gringeri of Franklin Lakes, NJ; and his sister, Grace (Gringeri) Gambone of Springfield, PA. Those wishing to honor Tony’s memory may make a contribution to: Environmental Defense Fund, P.O. Box 98051, Washington, DC 20077-7004

The family of Anthony "Tony" Richard Gringeri created this Life Tributes page to make it easy to share your memories.

Send flowers to the Gringeri family.