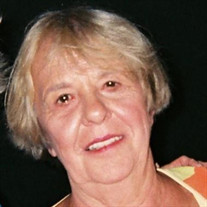 Born Arlene Carol Lenk to Andrew and Lorene Lenk on April 24, 1941, and raised on the banks of Lake Erie in North Kingsville, Ohio. She Graduated Edgewood High School in 1959. After graduation she began working as a receptionist with the Ashtabula School District. This is where she met her first husband Roland O. Kelly. Married in 1960, Roland C. (JR), Ron, and Robin came along soon after. In 1968 she began working in the office at Linde Air and enjoyed working with everyone until her retirement in 1988. 1988 is also when she married Fred Bristol and moved to Siesta Key in Sarasota, Florida where she has resided full time for the past 32 years. Whether in Ashtabula or Florida, Arlene was always ready to open her home to friends, neighbors, and family in need. She loved to host gatherings for any occasion both big and small. She could always put together a platter of finger food and never worried when more people than expected showed up. She enjoyed staying busy, whether it was helping raise her grandkids, and sometimes all the neighborhood kids, to working at Selby Gardens, Eddie Bauer, Stein Mart, or Write-On-Sarasota. She was also a member of the Palm Island Bridge Club. To many people her life seemed hectic, maybe even chaotic, but she always enjoyed life with whatever she did and whoever she was with. She was preceded in death by her parents Andrew and Lorene Lenk, Brothers Donald and Robert Lenk, and her husband Fred Bristol. She leaves behind her children JR Kelly, Ron (Marsha) Kelly, and Robin (Neill) Ferrill. Grandchildren Mallory (Stefan) Nefzger, and A. Graham Watkins, and one Great Granddaughter Stella Nefzger. The Family would like to express our Deep Appreciation to the dedicated staff of Tidewell Hospice for their hard work, comforting words, and loving attention during the exceedingly difficult past several months. Friends are invited to gather on Friday from 6-8 pm at Toale Brothers Funeral Home, 40 N. Orange Ave, Sarasota. Burial will follow in North Kingsville, Ohio.

Born Arlene Carol Lenk to Andrew and Lorene Lenk on April 24, 1941, and raised on the banks of Lake Erie in North Kingsville, Ohio. She Graduated Edgewood High School in 1959. After graduation she began working as a receptionist with the Ashtabula... View Obituary & Service Information

The family of Arlene C. Bristol created this Life Tributes page to make it easy to share your memories.

Send flowers to the Bristol family.