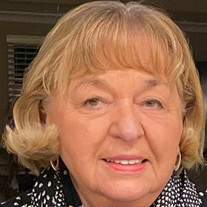 Audrey Ann Campbell (90) of Sarasota, Florida (formerly of Bloomfield Hills, Michigan) passed away on April 1, 2020. She was predeceased by the love of her life, David “Dave” Campbell. She is survived by a son, Scott and his wife Cathy, grandchildren Riva Beatty (Brandon), Craig, and Christy Smiler (Mike). Also, son, Barry and his wife Suzi, grandchild Emily Erichson & 4 great grand-children. Her companion was her calico cat who she dearly loved, “Molly”. Audrey was born in Highland Park, MI to Emil and Hulda Peterson on January 27, 1930. Her brother, Wendell, has predeceased her. Audrey and Dave both attended Mackenzie HS in Detroit. Their first date was at age 16 and it all began and lasted forever. Their constant love and caring for each other was a model for all. She started her career working for her father’s company, Mechanical Heat and Cold, the first company to add air conditioning to high rise buildings. Her work at MH &C helped put Dave through college at General Motors Institute. Audrey and Dave married in 1952 in Detroit. Dave was drafted into the Army and stationed in Wash-ington D.C. After his service, Dave returned to General Motors as an engineer, and later retired as a VP at GM. Audrey enjoyed her role as an executive’s wife. She developed her planning, entertaining and social skills to support numerous large dinner parties and functions. She was always known as THE Master Planner. In the early 60’s Audrey and Dave purchased their first Chris Craft boat, joined the Detroit Yacht Club, and quickly fell in love with boating. In the 80’s, they purchased a condo on Siesta Key and became snow birds. After retirement, Audrey and Dave designed and built a home, with a boat slip, in Sara-sota and moved to Florida full time. They joined the Sarasota Yacht Club and it wasn’t long before they were fully immersed in boating and club social activities. Audrey was always active on the SYC entertainment and decorating committees. Audrey greatly enjoyed bowling with the SYC Bowling League. She continued bowling with a league until 2018. Audrey and Dave moved to the Sarasota Bay Club in 2015, where they readily became friends with other residents and enjoyed the Club’s many activities. Sadly in 2016 Audrey lost her husband Dave, they had been together for 70 years and married for 64. Audrey remained independent, active and involved in social activities with her friends at SBC. Audrey will be dearly missed by her family, her many friends and Molly. The family plans to have a memorial at a later date. Details will be provided once plans can be made. In lieu of flowers, donations can be made to the Pulmonary Hypertension Association, 801 Roeder Rd, Ste 1000, Silver Spring, MD 20910 or to The Alzheimer's Association, 225 N. Michigan Ave. Floor 17 Chicago, IL 60601.

Audrey Ann Campbell (90) of Sarasota, Florida (formerly of Bloomfield Hills, Michigan) passed away on April 1, 2020. She was predeceased by the love of her life, David &#8220;Dave&#8221; Campbell. She is survived by a son, Scott and his wife... View Obituary & Service Information

The family of Audrey Ann Campbell created this Life Tributes page to make it easy to share your memories.