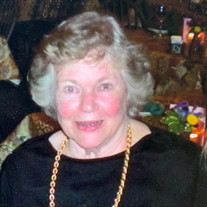 Barbara Turner Ives, 93, of Sarasota, FL died on October 22, 2021. Survivors include her daughter, Elizabeth (Robin) Ives Hamme and her husband, D. Eugene Hamme, of Flat Rock, NC, and her granddaughters, Keeler Gove Roche and her husband, Christopher Roche, and Blakely Gove Aluise and her husband, David Aluise, of Pittsburgh, PA. She is predeceased by her husband of 61 years, George S. Ives, and her daughter, Nancy M. Ives. Barbara was born and raised in Norwich, NY. She graduated from Abbott Academy and attended Bennington College and Cornell University. For much of her life, Barbara lived in Bethesda, MD while her daughters grew up. She was actively involved with the PTA, Girl Scouts, and the American Red Cross. In 1981, when Barbara and George retired, they moved to Sarasota where Barbara was active in the community as a year-round resident. She served on the Sarasota boards of Safe Place & Rape Crisis Center (SPARCC), Hands of Hospice, and the Century Club in addition to working with the Founders’ Garden Circle. In 2000, Barbara and George moved to Sarasota’s Plymouth Harbor where she served on many committees for the retirement community. She passed away at the Smith Care Center. A family memorial service will be held at a later date. Memorial donations may be made to the Boys and Girls Club of Sarasota County. Toale Brothers Funeral Home is in charge of arrangements. To send condolences please visit www.toalebrothers.com.

The family of Barbara Turner Ives created this Life Tributes page to make it easy to share your memories.

Send flowers to the Ives family.