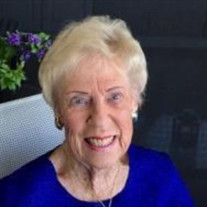 Barbara French “Bobi” Sanderson was born in Ottawa, Illinois on July 24, 1923, and died peacefully at home in Sarasota, Florida on June 17, 2020. She was the daughter of Sally and Melvin French and was proud of her family’s deep Illinois heritage. Bobi attended Smith College and Northwestern University. In 1944, she fell in love with a handsome attorney and Army officer, Edward G. “Sandy” Sanderson, and they were married for 48 years. Living in Evanston, Illinois, they raised a daughter, Chris, and a son, Ted. Bobi was a homemaker and active in volunteer community service. She was a member of the PTA for 18 years; served as a Girl Scout Brownie Troop Leader and Cub Scout Den Mother; joined service projects with the Junior League and was President of the Visiting Nurses Association. Bobi and Sandy retired to Longboat Key near Sarasota, Florida in 1974. Bobi had loved sun bathing on the beaches of Lake Michigan, and beach-walking on Longboat was heaven. Continuing her commitment to volunteering, she joined Mote Marine Aquarium as a guide where she greeted and educated visitors for 23 years. In 2012, she received a presidential citation called “point of light” honoring her many years of service to Mote Aquarium. She also enjoyed the companionship of friends at the Junior League of Sarasota. Bobi and Sandy were avid travelers and visited Europe, Africa, Japan and the South Pacific. Sandy predeceased her in 1992. In 2005, Bobi moved from her home on Longboat Key to the community at Plymouth Harbor, which also was the residence of her dear friend and long-time companion Dr. James “Jim” Griffith. For 21 years, Bobi and Jim shared a love of ocean liner cruises, ballroom dancing, Noel Coward, musical theatre and socializing with many friends. Throughout her life, Bobi loved to be with friends. As hostess, guest, guide, or greeter, she wanted to be friends with everyone she met. She also loved a good Whiskey Sour and Dark Chocolate crèmes. Bobi was predeceased by her husband Sandy and her brother Taylor French. She is survived by her daughter, Christopher Spang of Bryan, Texas, and her son, Edward F. Sanderson and daughter-in-law Carol Sanderson of Providence, Rhode Island; four grandchildren, Robert Spang, David Sanderson, Sarah Meade, and Katherine Sanderson; six great grandchildren, Sarah, Will, and Katie Spang, Emma and Taylor Meade, and Porter Sanderson; and by her devoted companion James Griffith. A celebration of Bobi’s life will be held at Plymouth Harbor at a time to be announced in the months ahead. Gifts in Bobi’s memory may be directed to: 1) Mote Marine Laboratory,1600 Ken Thompson Parkway Sarasota, FL 34236 2) Plymouth Harbor Employees Scholarship Fund, 700 John Ringling Blvd, Sarasota, FL 34236, or 3) Sarasota Senior Friendship Center, 1900 Brother Geenen Way, Sarasota, FL 34236.

The family of Barbara French "Bobi" Sanderson created this Life Tributes page to make it easy to share your memories.

Send flowers to the Sanderson family.