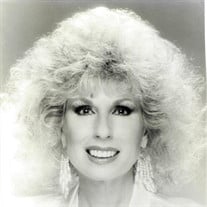 Barbara L. Stolfi-Maggio passed away on May 15, 2020 in Sarasota, FL. She was born on August 1, 1940 in Brooklyn, NY to Louis Stolfi and Dolly Barone. Barbara was a graduate of Packer Collegiate Institute and American University in Washington DC with a degree of Bachelor of Fine Arts. She majored in Communications, Speech and Drama. In addition, she continued her studies at The American Academy of Dramatic Arts. Upon graduation, she pursued a career as an actress, appearing in major motion pictures, television programs and commercials, and as a model doing print work. Barbara was a member of SAG, AFTRA and GIAA. She also interspersed her acting with managerial positions in the business world. Most recently, Barbara authored a book dealing with her father's career in boxing and her relationship with her parents. Her father was a celebrated professional fight referee who maintained the name he fought under, Teddy Martin. The book is titled "my life with The Third Man in the Ring (the drama outside the ropes)". Her book is a finalist in the 2014 Reader's Favorite Book Contest. She co-authored a screenplay based on her book that has attracted the attention of notable names in the motion picture industry who have shown a keen interest in developing the script into a major motion picture. In this endeavor, Barbara was working with top directors, writers and producers with regard to financing, budgeting, casting and distribution of motion pictures. While growing up, Barbara idolized her father and attended many of the bouts that he refereed. In doing so, she developed an easy-going relationship with many of the names in the boxing world. One of the standout names is that of Rocky Graziano who would call her to introduce her to contacts in show business. To this day, she is well known in many of the veteran boxing organizations in the New York-New Jersey area. To illustrate her affinity for boxing, one of the anecdotes she related occurred when she was reaching twelve years old. Her father asked what she wanted for her birthday. Shunning all things feminine, she requested a speed punching bag and got it. She developed such a skill at punching that speed bag that she amazed all that watched her. During her career as an actress, Barbara has appeared in films with such Hollywood luminaries as Jon Voight, Harrison Ford, Nicholas Cage, Bruce Willis, Beau Bridges, Jack Klugman, Telly Savales, Joe Franklin, Frank Sinatra, Jerry Orbach, Don Johnson and Samuel Jackson and has been directed by John Schlesinger, Andrew Bergman, Arthur Hiller, Mike Nichols, John McTiernan and Leonard Nimoy.

Barbara L. Stolfi-Maggio passed away on May 15, 2020 in Sarasota, FL. She was born on August 1, 1940 in Brooklyn, NY to Louis Stolfi and Dolly Barone. Barbara was a graduate of Packer Collegiate Institute and American University in Washington... View Obituary & Service Information

The family of Barbara L. Stolfi-Maggio created this Life Tributes page to make it easy to share your memories.

Send flowers to the Stolfi-Maggio family.