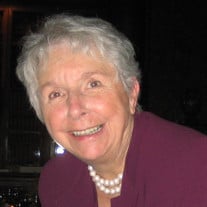 Barbara Davies Thompson of Sarasota Florida passed peacefully at the age of 88 on January 14th, 2020. She was born January 5th, 1932 in Buffalo, New York to Frederick and Elsie Bird Davies. Barbara attended high school at Withrow High School in Cincinnati, Ohio before resettling to Sarasota, Florida and attending the Ringling College of Art & Design. Barbara is preceded in death by her uncles Charlie Davies and Porter Bird, her aunts Grace Olga Davies and Lillian Bird, her cousin Lee Plate, and her husband, former City Manager of Sarasota, Kenneth Thompson. Barbara and Ken lived for many years at their residence on Hillview Drive, raising a family and creating many lasting memories through their gatherings of friends, sailboat outings, and promotion of the arts and the City. Barbara had many interests and was a longtime patron of the many arts offerings of the city of Sarasota. In later years Barbara renovated several houses in the Pioneer park neighborhood and was proud of doing a small part to help revitalize the community. Barbara was a devoted mother, grandmother and great grandmother, and greatly enjoyed spending time with her family. She is survived by her daughter, Laura (Jim) DeUnger and son, Ken (Melissa) Thompson, grandchildren Amanda (Robert) Lewis, Alexandra (fiancé Drew) DeUnger, Caroline Thompson and Miles Thompson, and great grandchildren Everett and Clara Lewis. Barbara’s family will be honoring her memory with a visitation at Toale Brothers Chapel, 40 N Orange Ave, Sarasota, Florida on Friday, January 17th from 5pm to 7pm. A funeral service at the same location on Saturday, January 18th at 11am, reception to follow at her home. Interment will be private. In lieu of flowers, donations may be made to the Kenneth Thompson scholarship fund for the Ringling College of Art & Design, or the American Cancer Society in Barbara’s remembrance.

The family of Barbara Davies Thompson created this Life Tributes page to make it easy to share your memories.