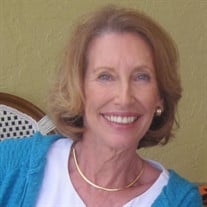 Bonnie G. Miscavage, 77, of Sarasota, passed away peacefully on March 22, 2022 from complications of Parkinson’s Disease in her home surrounded by her loving family. Bonnie and her husband moved their family to Sarasota, FL in 1976. Bonnie was born in Boca Raton, FL on June 22, 1944 to Lt. Col. Wilson A. and Gertrude Loraine Griesbeck. Her father was an officer in the U.S. Army Air Corps, which relocated her family all over the world including stays in Germany, Japan, Libya, France and throughout the U.S. Bonnie graduated from the University of Vermont with honors with her Bachelor of Science degree in Nursing in 1965. Bonnie started her nursing career at Kimbrough Army Hospital, Fort Mead, MD, where she met her husband, Robert. She soon realized her affinity and talent in psychiatric nursing, which led her to move her career to The Psychiatric Institute in Baltimore, MD. After the birth of her son and daughter, Bonnie concentrated on raising her children for over a decade, then returned to psychiatric nursing at Sarasota Palms Psychiatric Hospital primarily working the night shift so she could spend time with her family during the day. Bonnie’s career later transitioned into clinical studies, teaching pharmacology to nurses at the Sarasota Vo Tech School, home health care, and eventually retiring as the Program Director of The Fountains of Lakepoint Woods. Bonnie had a passion for her family, gardening, animals and helping those in need. She volunteered as the spokeswomen for the Racing Dog Rescue Project and appeared monthly on WWSB ABC 7 News to educate our community on greyhounds rescued from the racing industry and the importance of adoption. Bonnie also volunteered with Marie Selby Botanicals Gardens, the Senior Friendship Center, the Sarasota Opera House and Mote Marine’s Sea Turtle Conservation Program. She was a talented artist who loved to sketch and paint. She loved the beach, travel, Broadway shows, movies, literature, French pastries and metropolitan cities. Bonnie lived her life to the fullest, and those who knew her loved her kindness, wit and optimism. She is survived by her husband of 56 years, Robert Miscavage, her daughter Loraine Miscavage, her son Maison Miscavage and his wife Jane, and grandchildren Ellis and Audrey. Bonnie’s family will hold a memorial service and celebration of her life on Wednesday, March 30th at 1:00 P.M. at Toale Brothers Funeral Home (40 North Orange Ave, Sarasota, FL 34236). In lieu of flowers, memorial donations may be made to Parkinson Place (parkinsonplace.org) or the International Fund for Animal Welfare (IFAW.org).

Bonnie G. Miscavage, 77, of Sarasota, passed away peacefully on March 22, 2022 from complications of Parkinson&#8217;s Disease in her home surrounded by her loving family. Bonnie and her husband moved their family to Sarasota, FL in 1976. Bonnie... View Obituary & Service Information

The family of Bonnie G. Miscavage created this Life Tributes page to make it easy to share your memories.

Send flowers to the Miscavage family.