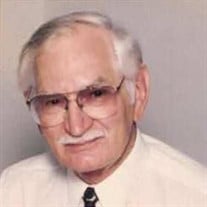 On Saturday, June 27, Calvin W. Erb, long time resident of Sarasota, loving husband, father and grandfather, passed away at the age of 89. Cal was born on May 2, 1931 in Hartville, OH to Abe and Elizabeth Erb. He moved to Sarasota in 1949. Having operated a fulltime general accounting practice since 1959, Cal retired in September 2019 at the age of 88, having specialized in restaurant management. Even though his clients’ names are confidential, you may have enjoyed eating at one of the establishments on St. Armand’s Circle, Siesta Key, Southgate, Main Street or North Tamiami Trail to name but a few. He graciously volunteered to prepare tax returns for widows of first responders. Cal is survived by his loving spouse, Pamela Dormany, who he married in 1982, his son Gregory (Margaret) and daughter Julie (Richard), ex-wife Edith Erb, the mother of his children, and five grandchildren Daniel Erb (Mandy), Eleanor Hoffman Milne (Steve), Caroline Hoffman, Katherine Hoffman, and Alexandria Erb. He was looking forward to the arrival this summer of two great-grandchildren. He is also survived by his siblings, Sara Doster, Edna Mast (Sam), and Martha Beachy (Dick), as well as many nieces and nephews. Cal is predeceased by his granddaughter, Laurel Erb, and his siblings, Aden Erb, Erma Raber, Betty Erb, and Mary Schmidt. Cal dedicated himself to whatever he did, whether it was celery farming, owning Mister Donut shops, a variety of restaurants or numerous real estate ventures, as well as his accounting career. He even owned a lounge restaurant in downtown Sarasota, The Wooden Nickel. Cal was involved in many charitable organizations. He was one of the founders of the Sarasota Offshore Grand Prix and Suncoast Charities for Children. He was a member of the Florida, National, and International Crime Stoppers Boards. As a founder of Sarasota Crime Stoppers Inc, he served as the President of the organization for many years. He was honored internationally in 1991 as “Crime Stopper of the Year”. He also received the Crime Stoppers Lifetime Achievement Award. Cal was a past President and Treasurer of the Sarasota 100 Club, the Florida State 100 Club, Suncoast Charities for Children, Suncoast Foundation for Handicapped Children and Child Development Center. He was a life member of the Elks Lodge #1519, a member of the Sahib Shrine Temple A.A.O.N.M.A, the Carry B. Fish Masonic Lodge and earned a Scottish Rite of Freemasonry in the 33rd Degree. One of Cal’s proudest moments was in 1996 when he was chosen to carry the Olympic Torch through downtown Sarasota. Cal loved Sarasota and enjoyed watching the sunset over Sarasota Bay with his wife. He also enjoyed Nascar and raising herbs in The Erb Garden. In addition to his many accomplishments, Cal was best known for his fund raising of millions of dollars to support the developmental needs of children. A private service for family and invited friends will be held at Toale Brothers Funeral Home, Colonial Chapel. Memorial donations can be made to Suncoast Charities for Children or Shriners’ Children’s Hospital. A Celebration of Life will be scheduled a later date.

On Saturday, June 27, Calvin W. Erb, long time resident of Sarasota, loving husband, father and grandfather, passed away at the age of 89. Cal was born on May 2, 1931 in Hartville, OH to Abe and Elizabeth Erb. He moved to Sarasota in 1949.... View Obituary & Service Information

The family of Calvin W. Erb created this Life Tributes page to make it easy to share your memories.

Send flowers to the Erb family.