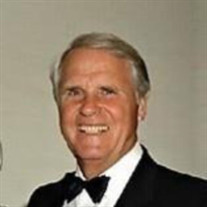 Caren L. (Jeff) Reed, age 86, passed away July 27, 2021, at his home on Longboat Key, Florida, following a long illness. He and his wife, Judy, had lived most of their adult lives in the northern suburbs of Chicago Preceded in death by his sister Gwendolyn Reed Baker, Caren is survived by his brothers: Gareth (LaVonne) and Keith (Beth). He is also survived by Judy, his wife of 65 years, three children: Tim (Liz), Betsy Clark and Andy, seven grandchildren--Graham Clark, Emery Clark (Melissa), Julia Williams (Ben), Maddie, Jack, Peter and Anna, two great grandchildren, 12 nephews and nieces and several grand nephews and nieces. Caren's extended family reside in seven states from California to Massachusetts. Caren was born November 14, 1934 to Florence and Ivan Reed in Cedar Rapids, Iowa. He graduated from Martelle High School and Iowa State University. He married his college sweetheart, Judy, and moved to Evanston, Illinois after Caren accepted a position with the Continental Illinois National Bank, where he worked as a commercial banker for 34 years eventually becoming Executive Vice President and Head of North American Banking. After his career with Continental, Caren became a Founding Principal and President of The Private Bank and Trust in Chicago, rising to Vice Chairman of the Board before retiring in 1999. During his career and even after retirement Caren was active in many community and business boards with his favorites being a Director of the Ravinia Festival Board, Chairman of the Mather Foundation from 2006-2011, multiple terms in two HOAs and then Treasurer of the Bird Key Yacht Club in Sarasota without ever having owned a boat! But he was very exacting and precise with financial matters and was asked by many organizations for his assistance. Even when he served six years in the Iowa National Guard and the U.S. Army Reserves he was usually put in charge of handling payroll matters. Caren will be remembered for his love of family, God and Country, loyalty, business success, honesty, and a warm smile that often included a knowing twinkle in his blue eyes, singing sweet lullabies and songs to his wife, children and grandchildren, countless gin games, generous self-served portions of ice cream, unending generosity and his love of and talent for many sports, especially tennis, baseball, 16" softball and basketball—and of course who could forget his lifelong love for the Cubbies. Caren was a memorable person who loved and was loved greatly and will be forever missed. Memorial services in Northfield, Il. and Sarasota are pending. In lieu of flowers please support the charity of your choice or Tidewell Hospice Foundation, Inc. 5955 Rand Blvd. Sarasota, FL 34238.

Caren L. (Jeff) Reed, age 86, passed away July 27, 2021, at his home on Longboat Key, Florida, following a long illness. He and his wife, Judy, had lived most of their adult lives in the northern suburbs of Chicago Preceded in death by his... View Obituary & Service Information

The family of Caren L. (Jeff) Reed created this Life Tributes page to make it easy to share your memories.

Send flowers to the Reed family.