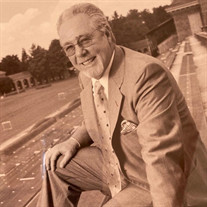 Carl W. Cheek was born on New Year’s Day 1939 in Blossberg, Alabama. Raised in Maryland and always a hard worker, he excelled in school and sports. He was the first in his family to ever attend college, earning a football scholarship (QB) at William and Mary. He was inducted into the William and Mary Athletic Hall of Fame in 1988. In appreciation to his alma mater, Carl endowed three scholarships at William and Mary and was always one of its strongest supporters. After serving his country in the U.S. Army Special Forces, 82nd Airborne and earning the rank of Major in the U.S. Army Reserves, Carl began his successful business career, founding Specialty industries in 1972. He built the company from the ground up, growing it into one of the largest employers in Central Pennsylvania. He proudly brought his sons, Carl W. Cheek, Jr., and Frederick Cheek into Specialty. Carl married the love of his life, Sylvia, in 1994 They moved to Florida in 1999. Carl was happiest at his home in Longboat Key, cherished his lifelong friends from Sigma Nu and never forgot where he came from. Carl passed quietly on February 27, 2020, with his wife Sylvia by his side. He will be interred with his parents, Hubert Cheek and Grace Evelyn Black Cheek. He is survived by his wife, Sylvia, children Carl W. (“CW”) Cheek, Jr., Frederick Cheek (Debbie) Anne Cheek, grandchildren, Ellie and Haden Cheek and Mary Rachel Kostreva. A celebration of life will be held, Friday, March 6, 2020, at 4:00pm, at Joan M. Durante Park, 5550 Gulf of Mexico Drive, Longboat Key, FL 34228.

Carl W. Cheek was born on New Year&#8217;s Day 1939 in Blossberg, Alabama. Raised in Maryland and always a hard worker, he excelled in school and sports. He was the first in his family to ever attend college, earning a football scholarship... View Obituary & Service Information

The family of Carl W. Cheek Sr. created this Life Tributes page to make it easy to share your memories.

Send flowers to the Cheek family.