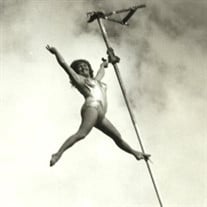 Carla Wallenda, the only daughter of legendary circus daredevils, Karl and Helen Wallenda, and the last surviving original troupe member that topped the famed seven-person-pyramid, died Saturday morning, March 6, 2021, of natural causes. Carla topped the famed pyramid for eleven years during her career, but preferred the towering sway-pole, which killed her aunt Rietta, in 1963, in a fall in Omaha, NE. Carla began her professional career at 4 years of age in a film titled, Hi-wire Layoff with Lou Jacob and Little Carla. She continued for more than 7 decades performing many daredevil stunts climaxing her illustrious career with the sway-pole. Her final performance aired nationally on TV with Steve Harvey, on a show titled Forever Young. This was followed by a special appearance in a Miley Cyrus video Younger Now, induction into the circus Ring of Fame, 2019, and appearing in the pilot reality TV show Highwire Warriors. Carla completed her career with no less than 3 world records: Youngest daredevil in history, oldest daredevil in history, and longest running career of any daredevil in history. She was preceded in death by her parents, husband of 39 years, highly decorated Vietnam veteran, Michael Morgan,and son, Mario, also a Wallenda daredevil. She is survived by 3 children, Ricky, Rietta, and Valerie, 9 grandchildren, and 13 great-grandchildren. Services will be held on March 18th, 2021 at Toale Brothers Funeral Home, 40 N. Orange Ave., Sarasota, FL 34236. 11 am viewing. Service 1:30 pm, followed by service at Manasota Memorial Cemetery Rotunda, and reception at the Showfolks of Sarasota, 5 pm. If you prefer donations in lieu of flowers suggested; Showfolks of Sarasota, The Showmen's club of Gibsonton FL or your favorite charity in the name of Carla Wallenda.

The family of Carla Wallenda created this Life Tributes page to make it easy to share your memories.

Carla Wallenda, the only daughter of legendary circus daredevils,...

Send flowers to the Wallenda family.