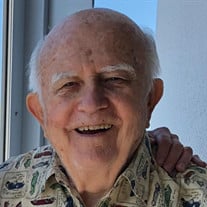 Charles Emsley Babcock, 89, of Sarasota, Florida passed away on October 26, 2021. Charles was born September 13,1932 to Jannett and A. Dorr Babcock in Fort Wayne, Indiana. Charlie always considered himself to be a “Florida Boy” having spent a good bit of his boyhood on Anna Maria Island. Before retiring to Siesta Key, Florida with the love of his life, Jeanne, they lived in Indianapolis where he owned Ross & Babcock Travel Bureau, Ross & Babcock Tickets and Gray Line Sightseeing of Indianapolis. They loved to Travel…Jeanne sure did, and Charlie loved being with her. Charlie was also the President of the Ticket Sellers Union and when the Colts moved to Indianapolis he was asked to organize and manage their ticket operation as well as the Hoosier Dome. Charlie always said that he was “an amateur real estate investor”, but as always, he down-played his expertise and work ethic. While he enjoyed work and “doing the deal” it also allowed him to really enjoy his hobbies of boating, especially with family and friends or collecting Cords and 41’ Cadillac Convertibles. The car stories never ended. Charlie was extremely generous with his time, insights, and resource to family, friends, and acquaintances. Need a job, he’d make it happen. Perhaps as surprising to himself as to anyone else, Charlie received Christ while attending Sarasota Baptist Church and was Baptized in the Gulf of Mexico just off Siesta Key. He is survived by his loving children, John Babcock (Stephanie) and Kimberly Meji (Al), grandchildren, Kathleen, Sarah and Mary Babcock, Devon and Avery Forehand and brother Jim (Barb), and cousins who were more like siblings, Sally Jones and David Dorr Babcock. Visitation will be November 12, 2021, at 10:00-11:00 with a Service following at Toale Brothers Funeral Home, 40 North Orange Ave, Sarasota. Interment will follow at Sarasota National Cemetery at 1:00 pm. In lieu of flowers consider a donation to Sarasota Baptist Church, Proctor Road, Sarasota.

Charles Emsley Babcock, 89, of Sarasota, Florida passed away on October 26, 2021. Charles was born September 13,1932 to Jannett and A. Dorr Babcock in Fort Wayne, Indiana. Charlie always considered himself to be a &#8220;Florida Boy&#8221;... View Obituary & Service Information

The family of Charles Emsley Babcock created this Life Tributes page to make it easy to share your memories.

Send flowers to the Babcock family.