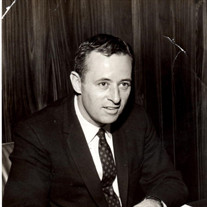 Charles Robert (Bob) Coutu, born December 29, 1927 in Providence, Rhode Island, peacefully passed away March 24, 2022 in Sarasota, Florida. He was a loving husband, devoted father and wonderful friend to so many. Bob grew up and attended schools in Rhode Island, graduating from East High School in 1945, then attending the University of Rhode Island before joining the United States Marine Corps. His service with the Marines was interrupted to tend to an ailing mother. He, then, ultimately joined the family business, Coutu Bros. Inc., a GMC Truck dealership for over 50 years in both Central Falls and Pawtucket, Rhode Island, that also included the Coutu Bros Movers business that still operates today in New England under that name. He met and married his wife, Claire (Guarino) of Lincoln, Rhode Island in 1956, who survives him after 66 years of marriage. Bob is also survived by his four (4) children and their spouses/partners; Leslie (Coutu) Grover (David Grover) of Parrish, Florida; Michael Coutu (Victoria (Hettleman) Coutu) of Windermere, Florida; D.J. Coutu (Sue Vipond) of Sarasota, Florida; and Paul Coutu (Carolyn Distel) of Atlanta, Georgia. Bob is also survived by his two (2) grandchildren – Robert Coutu of Orlando, Florida, and Lindsay Grover of Boca Raton, Florida. Bob and Claire moved to Florida in 1992 and have been residents of Sarasota since that time. Bob worked at various golf clubs while in Sarasota up until age 92, including the Oak Ford Golf Club and, most recently, The Meadows Country Club. He was loved by many of his co-workers not only for his tireless energy, but for his engaging personality and sense of humor. During his years in Rhode Island, Bob was a fixture at and deeply involved with the Pawtucket Boys Club, Jaycees and Rotary, in addition to the To Kalon Club and various local golf and bowling leagues and events throughout the City of Pawtucket. He never missed attending a sporting event involving his children, and was a devoted fan of all the Boston professional sports teams. Watching a game with Bob was better than being at the game itself. We already miss him dearly. Services will be held at Sarasota National Cemetery on Thursday, April 7th at 2:30pm. For those planning to attend, please arrive no later than 2:15pm and join the assigned procession for his services.

Charles Robert (Bob) Coutu, born December 29, 1927 in Providence, Rhode Island, peacefully passed away March 24, 2022 in Sarasota, Florida. He was a loving husband, devoted father and wonderful friend to so many. Bob grew up and attended... View Obituary & Service Information

The family of Charles Robert (Bob) Coutu created this Life Tributes page to make it easy to share your memories.

Send flowers to the Coutu family.