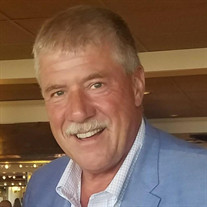 Charles John Maguire, “Charlie”, 67, of Sarasota, Florida, passed away at Sarasota Memorial Hospital on April 15, 2022 after a hard-fought battle with cancer. He was surrounded by his loving wife and children. Charlie was born on February 5, 1955 to Charles and Lorraine Maguire in Newark, New Jersey. A 1973 graduate of Essex Catholic High School, he studied Metallurgical Engineering at Stevens Institute of Technology and graduated with a Bachelor of Engineering degree in 1977. Charlie began his 37 year career at Exxon (later ExxonMobil) in Florham Park, NJ, beginning as an entry level engineer and rising to Executive Vice President, among other positions. He traveled many thousands of miles around the world during his career and he and his family called many places home, with assignments in New Jersey, Ontario, Belgium, Texas, England, Louisiana, California, and Virginia. After retiring from ExxonMobil in 2013, Charlie and his wife, Colleen, made Brick, New Jersey and Sarasota, Florida home, spending much of his time playing golf, making homemade bread, gardening, and attending Spring Training games with Colleen, a fellow Yankees and baseball fanatic. Charlie was a member of the Knights of Columbus Our Lady of Victory Council in Sarasota, a volunteer with 40 Days for Life, Sarasota, and served as chairman of the Stevens School of Engineering and Science advisory board before stepping down in 2021. In a final act of generosity, he donated his remains to medical research. Charlie was a strong, kind, loving, and supportive father, and a fiercely dedicated husband. He is survived by his wife, Colleen, his children, Charlie, Erin (Larounis), and Conor, his son-in-law, Nicholas Larounis, his soon-to-be grandson, and his siblings Linda Quinn, Coleen Salisbury, Maureen Healey, Thomas Maguire, Laurie McAvoy, 19 nieces and nephews and several grand nieces and nephews. Donations in Charlie’s memory may be made to the American Lung Association www.lung.org, or 40 Days for Life by calling Cheryl Tamez 979 595-8431. There will be a Funeral Mass on Thursday, May 12, 2022 at 10 am at St. Martha’s Catholic Church, 200 N Orange Ave, Sarasota. Immediately following the mass there will be a celebration of life at the Knights of Columbus Banquet Hall at 4880 Fruitville Rd, Sarasota.

Charles John Maguire, &#8220;Charlie&#8221;, 67, of Sarasota, Florida, passed away at Sarasota Memorial Hospital on April 15, 2022 after a hard-fought battle with cancer. He was surrounded by his loving wife and children. Charlie was born on... View Obituary & Service Information

The family of Charles John Maguire created this Life Tributes page to make it easy to share your memories.

Send flowers to the Maguire family.