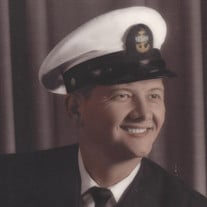 Charles N Regan, Jr. United States Navy, Retired and Past Commander of the York Rite Masons, age 91, a native of Florida, passed away peacefully in Naples, Florida on December 14th, 2021, surrounded by his loving family. Charles was a 1948 graduate of Ft. Myers High School. That same year he enlisted into the United States Navy serving initially on the USS Collette stationed in the Western Pacific when the ship was called to lead the invasion force of Incheon, Korea as the US entered the Korean War. He served for 20 years until 1968, the last 6 years based at Pearl Harbor Naval Base, retiring as a Chief Petty Officer. While in the Navy, he completed his BS in Electrical Engineering and became a Professional Engineer. He went on to serve another 20 years in leadership roles with the US Federal Government beginning as the Director of OSHA for Hawaii and the US Trust Territories of the Pacific, Director of Maritime Safety Programs (Washington DC) and Deputy Chief of Safety and Environmental Programs with the National Park Service. After retiring from the US Federal Government, he finished his career in the private sector as President of Safety & Environmental Engineering Consultants in Washington DC. He also taught engineering at the University of Hawaii and was an Adjunct Professor at the University of Western Pacific. He served as President of several industry associations including the American Society of Safety Engineers, American Industrial Hygiene Association and Chairman of the Federal Safety Council. He was active in the Masons rising to Commander of the York Rite Masons of Hawaii and remained active with the Masonic Lodge No 301 in Venice, FL and the Sahib Shriners in Sarasota, FL. He also remained active with the Navy through the American Legion Post 159, the Florida Retired Chief Petty Officers Association and the Tin Can Sailors. A man of faith and service, Charles loved his family and the outdoors. He enjoyed hunting, fishing and gardening. Charles was preceded in death by his beloved wife Lois. He is survived by 3 children: Charles Regan, Mark Regan and Becky Potts, daughter in law Lindy Regan, stepchildren Jay and Michael Rosenblatt and 9 grandchildren; Cameron, Hannah and Rachel Regan, Brett, Jason and Rory Potts and Bailey, Ben and Jack Rosenblatt and a large extended family including 11 great grandchildren, cousins, nieces and nephews. Visitation will be held on Tuesday December 28, 2021, from 10:00 AM until 11:30 AM at Toale Brothers Funeral Home, Ewing Chapel, 140. E. Venice Avenue, Venice, FL, 34285. Funeral service with full military honors will be held Tuesday at 1:30 PM at Sarasota National Cemetery, 9810 Highway 72, Sarasota, FL 34241. In lieu of flowers, the family requests that a donation be made to his life-long cause - the Shriners Hospital for Children, 2900 N. Rocky Point Dr., Tampa, FL 33607, www.shrinershospitalforchildren.org

Charles N Regan, Jr. United States Navy, Retired and Past Commander of the York Rite Masons, age 91, a native of Florida, passed away peacefully in Naples, Florida on December 14th, 2021, surrounded by his loving family. Charles was a 1948... View Obituary & Service Information

The family of Charles N. Regan, Jr. created this Life Tributes page to make it easy to share your memories.

Send flowers to the Regan, family.