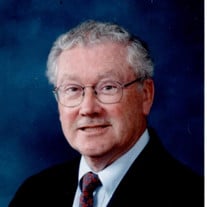 Charles William Riegle, Sr., 85, of Sarasota, and long-time member of Laurel Oak Country Club, passed away at sunrise on January 17, 2021. He died as he wished: peacefully at home, with his loving wife and children by his side. Born in Buffalo, New York, on June 25, 1935, to Dorothy McMurray Riegle and Warren Coleman Riegle, Charles is survived by Aušra, his wife of 53 years; sons Charles W. Riegle, Jr. (Chuck), of Charlottesville, Virginia, and Christopher V. Riegle of Marblehead, Massachusetts; daughter Kristina A. Riegle of Rochester Hills, Michigan; their spouses Cynthia, Helen, and David; grandchildren Phoebe, Coleman, Evan, Oliver, and Genevieve, who knew him as “Poppy”; sister Patricia Morehead and brother-in-law Dr. William E. Morehead, of Memphis; and beloved nieces, nephews, grandnieces, and grandnephews, who knew him as “Uncle Charlie.” He is already dearly missed, but his family and friends have many, many wonderful memories. In 1942, Charles’ family moved from Bath, New York, to Memphis, Tennessee, where he completed his schooling. He served his church as head boy in the St. John’s Episcopal boys choir and his country through the Boy Scouts, the ROTC, the Army Reserve, and the Air Force Reserve medical corps. In 1967, Charles married the love of his life, Aušra Vedeckas, in New York City. Following a move from Memphis to Westport, Connecticut, the couple settled in Riverside, Connecticut, where they lived for 31 years and raised their children. In 2004, they made Sarasota their permanent home and joined Laurel Oak Country Club. The son of an enterprising mother and a China Marine, Charles was outgoing and driven. He put himself through Southwestern at Memphis (now, Rhodes College), graduating with a Bachelor’s in Psychology in 1957. He worked as a pharmaceutical sales rep and trainer before moving to a career in advertising. In 1972, he co-founded Rolf Werner Rosenthal, Inc., an advertising agency, in New York. After growing the business into a market leader, he and his partners sold it to Ogilvy & Mather in 1983. He conducted business as he did his life: honorably and with aplomb. He was proud to have made many clients his lifelong friends. Charles volunteered time and talent to the Greenwich Symphony Orchestra, the Boys & Girls Club of Greenwich, Innis Arden Golf Club, and Christ Church Greenwich. He was an active member of the Sons of the American Revolution (SAR), a group dedicated to promoting patriotism and preserving American history. He held officer and committee positions across chapters in Connecticut, Massachusetts, and Florida, adding countless members to their rolls. In 2019, he capped off years of genealogical research by publishing The Riegle Family in America. While work, service, and patriotism were important to him, Charles was first and foremost a family man. He and Aušra were always together: on the golf course, at the opera, entertaining friends, and traveling the world. They made epic summer road trips to escape the Florida heat. He spared no love for his children, whom he mentored by example. A private funeral service was held on January 22nd at the Church of the Redeemer in Sarasota, where Charles was a member. Burial will follow at a later date. Donations in his memory may be made to the Cholangiocarcinoma Foundation, Covenant House, Tidewell Hospice, or a veterans' group of your choice or simply plant a tree.

Charles William Riegle, Sr., 85, of Sarasota, and long-time member of Laurel Oak Country Club, passed away at sunrise on January 17, 2021. He died as he wished: peacefully at home, with his loving wife and children by his side. Born in Buffalo,... View Obituary & Service Information

The family of Charles William Riegle, Sr. created this Life Tributes page to make it easy to share your memories.