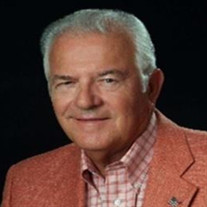 Charles E. Sax, 87, died peacefully surrounded by his daughters and trusted care givers. He grew up in Cleveland, Ohio, son of the late Charles Leon and Susan Sax. Charlie graduated from Case Western Reserve in 1954. He also served in the Army during the Korean War. Around that time, Charlie met and married the love of his life, Shirley J. Anderson Sax. After marrying, the Saxes spent 62 years together and went on to live in Philadelphia, Pittsburgh, Chicago, and Ann Arbor before retiring to Sarasota in 1997. Charlie worked for Nalco Chemical Company for forty years beginning as a Sales Engineer. During this time, he graduated from Harvard University’s Senior Executive Fellows program and then became CEO of Adco Technologies. After retiring he served for ten years at SCORE helping businesses prosper, finally stepping down as President. He loved art, music, education, travel, his wife, children, grandchildren and friends. He was known for his adventurous and hard-working spirit. As his business card in retirement years stated, Charlie was Chief Corporate Overhead, bon vivant and raconteur, who bought and sold companies, entertained directors and quelled takeovers. In recent years, Charlie is best known for his love of words, history and his sense of humor. He also wrote his autobiography as a way to share ancestral history for future generations. He had just begun to teach others how to write their own autobiographies. Charlie, along with Shirley, loved to sing and entertain in their business and social circles. They were long time members at the Church of the Palms where Charlie was a Shepherding Deacon. Charlie is survived by his brother Jim, his daughters, Tracy, Lori, Amy, Beth and Cara, his son-in-laws Ned and Artie, grandsons, Ace, Austin, Charlie and Max and granddaughter, Callie. A memorial service will be held at 10:00am on Thursday, March 3, 2021 at Church of the Palms, 3224 Bee Ridge Road, Sarasota, FL 34239. In lieu of flowers, the family requests memorial donations be made in Charlie’s name to Tidewell Hospice, Philanthropy Department, 5955 Rand Boulevard, Sarasota, FL 34238.

Charles E. Sax, 87, died peacefully surrounded by his daughters and trusted care givers. He grew up in Cleveland, Ohio, son of the late Charles Leon and Susan Sax. Charlie graduated from Case Western Reserve in 1954. He also served in the... View Obituary & Service Information

The family of Charles E. Sax created this Life Tributes page to make it easy to share your memories.

Send flowers to the Sax family.