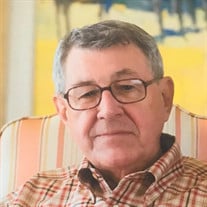 Charles Raffo “Chuck” Smith, 87, passed into eternal life on May 12, 2020 in Sarasota, FL. Formerly of Charleston, WV. Charles R. “Chuck” Smith was born on March 14, 1933 in Navilleton, IN to the late Charles A. Smith and Anna Mae Masterson Smith. He is survived by his sons Todd A. Smith (Tina) and Charles R. Smith (Genie); three grandchildren Amanda T. Smith, Shelby Smith and Grayson Smith; sister Thelma Terry and brother James L. Smith. Charles R. “Chuck” Smith is predeceased by his loving wife of 61 years Mary George Schnell Smith. He is also predeceased by his sisters, LaVerne Geswein, Stella Whitson, and Dorothy Williams. Charles R. “Chuck” Smith attended Indiana University and graduated at the University of Louisville and has a Master’s Degree in Banking from Louisiana State University. He was the Senior Vice President of Louisville Trust Bank, Louisville, KY in 1958 for 21 years. He was the first Louisville banker to be named to the top post in a large out-of-state bank. Mr. Smith was extremely active in Louisville, KY in a broad range of civic and banking activities. He held the position of Chairman and President of the Kentucky Derby. He was then elected President and Chief Executive Officer of the National Banc of Commerce of Charleston, WV for 15 years, October 1979 until his retirement 1994 but not completely retired as he continued as Chairman and Chief Executive Officer of Commerce Banc Corporation, until the merge in with Huntington Bancshares of West Virginia to become Director and served on the board until 1997. He was also extremely active with the new and changing banking and investment industry implementing a new trend. Chuck’s civic activities and memberships consisted of a multitude of prestigious organizations naming a few as on the Board of St. Francis Hospital; Board of Trustees with many organizations. Chuck’s involvement with the Arts and Music of Charleston will not be left unspoken by his devotion to this special community. Chuck and his wife then relocated to Florida to be with their sons in 1997 and soon to be three grandchildren. He again became very active within the Sarasota, FL community. Chuck served on the Board and as a Trustee at the Ringling School of Art and Design; Mote Marine Laboratory and Aquarium, and a contributor to the Sarasota Opera House. He was also active with Marina Towers. He was a devoted husband, father, grandfather and friend who will never be forgotten by all that loved his caring and generous nature. In lieu of flowers, memorial donations may be made to the Ringling College of Art and Design www.giving.ringling.edu; Mote Marine Laboratory www.mote.org/support/donate and St. Martha’s Catholic Church.

The family of Charles Raffo Smith created this Life Tributes page to make it easy to share your memories.

Send flowers to the Smith family.