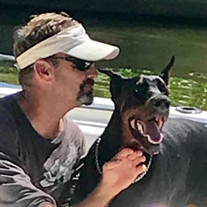 The family and friends of Christopher Boyne are sad to give news of his recent passing on January 29th, 2022. Captain Chris, as he was affectionately known, was born on January 8, 1968 to parents Peter Boyne and Erma Zvonyik of Connecticut and is survived by the love of his life Lynne, and his parents, four sisters and two brothers in Connecticut. With a tremendous love of fishing inspired by his grandfather, Chris made his way to Florida in the 1990’s and worked for firms in landscape design and irrigation that allowed the freedom to explore the waters off Sarasota shores. While working a project in the Longboat Key neighborhoods, he met Lynne and they were married in 2000. While living on the Key, Chris began to work and became licensed as a sport fishing captain and eventually purchased his own vessel and began a deep-sea charter fishing business, Poco Grande Sportfishing. His many clients will attest to the love of the sport and the open sea that Chris shared with them, scoring many a big fish and fabulous catches, plus a lot of fun times with new friendships. Chris was also very capable in construction and with Lynne, designed and renovated their Longboat home that was a haven to many of their friends for good times on the deck watching for manatee, enjoying cocktails, or a sunset boat ride in the Bay. Before most boating and fishing days, Chris would enjoy having breakfast with his friends at New Pass Bait Shop, where his business was located and where many fishing tales were shared with his buddies and associates. A Catholic service of remembrance will be held at St. Mary’s Star of the Sea on Longboat Key, February 15th at 3:00 PM. Immediately following, there will be a celebration of life for Christopher at the New Pass Bait Grill and Bait shop on City Island in Sarasota. Condolences may be sent to Mrs. Lynne Boyne at 630 Longview Drive, Long Boat Key FL 34228. In lieu of flowers, Lynne has suggested that donations be made to the GBS-CIDP Organization for the outreach, support, and research of Guillaine-Barre Syndrome and related variants of CIPD neurological disorders. Donations can also be made to St. Mary’s Star of the Sea, 4280 Gulf of Mexico Drive, Long Boat Key FL, 34228.

The family and friends of Christopher Boyne are sad to give news of his recent passing on January 29th, 2022. Captain Chris, as he was affectionately known, was born on January 8, 1968 to parents Peter Boyne and Erma Zvonyik of Connecticut... View Obituary & Service Information

The family of Christopher A. Boyne created this Life Tributes page to make it easy to share your memories.

The family and friends of Christopher Boyne are sad to give news...

Send flowers to the Boyne family.