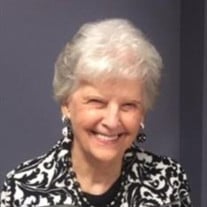 Cora Theresa Cyr Jones, 91, of Venice, Florida passed away peacefully with family at her side on Sunday, August 30, 2020. Cora was born in Fort Kent, Maine, on December 23, 1928 to F. Joseph and Alma (Dugal) Cyr. After high school, Cora attended Becker Junior College in Worcester, Massachusetts and then received her degree from Boston University in 1950. Following graduation, Cora moved to the big city, working as a bi-lingual secretary at the Wildenstein Art Gallery in New York City. In New York, Cora met Keith L. Jones (across a crowded YMCA dance floor) and they were married on October 20, 1951. A year later, Keith was hired as an auditor by Northwestern Mutual Life and the couple moved to Milwaukee, Wisconsin. Cora and Keith had two children, Jeffrey (Donna), Jacksonville Beach, Florida and Pamela Ohrt, Cedar Falls, Iowa. They had four grandchildren, Dawn (Martin VanBrunning), Nathan (Lissa) and Jonathan (Laura) Ohrt and Brian Jones (Brenna) and Cora is also survived by numerous nieces and nephews. Cora was preceded in death by her husband Keith and her sisters Leonie, Yvonne, Carmen, Fern and Blanche and brothers John, Conrad, Adrian (Chick), Norman and Richard (Dick). Cora and Keith lived in Whitefish Bay, Wisconsin most of their working lives. After Pam and Jeff entered high school, Cora was a business education teacher at Nicolet High School for many years and subsequently worked for Mutual Savings and Loan in Milwaukee as a corporate trainer. After retiring in 1987, Cora and Keith initially split time between Milwaukee and Florida and ultimately located permanently in the Venice, Florida area. Cora and Keith traveled extensively throughout the Caribbean, Europe, the Greek Islands, Russia, Australia and New Zealand. They visited all 50 states as well as many areas of Canada. They also participated in a number of Elderhostels both in the US and Europe. Cora enjoyed volunteering at church and served as a lector and head lector at the parishes she attended. She also was very active in bringing the Peace by Peace conflict resolution program to Milwaukee and Venice elementary schools. Cora and Keith met dancing and they continued their dancing passionately until just days before Keith’s final illness (including 62 straight years of dancing lessons). Visitation will be held at Toale Brothers Funeral Home, Ewing Chapel, 140 East Venice Avenue, Venice, FL, on Tuesday, September 8, 2020, 12:00pm until 1:00pm. Funeral services will be held at the Toale Brothers Funeral Home in Venice, Florida on September 8, 2020, at 1:00pm. with burial following at Sarasota National Cemetery, where Cora will join Keith in eternal rest. In lieu of flowers, contributions in Cora’s memory may be made to the Muscular Dystrophy Association, 161 North Clark St, Ste 3550, Chicago, IL 60601 MDA.Donordrive.com.

Cora Theresa Cyr Jones, 91, of Venice, Florida passed away peacefully with family at her side on Sunday, August 30, 2020. Cora was born in Fort Kent, Maine, on December 23, 1928 to F. Joseph and Alma (Dugal) Cyr. After high school, Cora attended... View Obituary & Service Information

The family of Cora C. Jones created this Life Tributes page to make it easy to share your memories.

Send flowers to the Jones family.