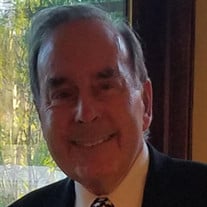 The family of Dana A Callanan, of Sarasota, Florida is sad to announce that Dana passed away on January 19, 2021. He was pre-deceased by his wife of 46 years, Eleanor Callanan, brothers David Callanan and Aaron Snow and sons Richard and Robert Wilder. Dana was born in Beverly, Mass to Ruth and Walter Callanan. He is survived by his wife Wendy of 17 years, sister Priscilla Wieland of Scarborough, ME, sister Faith Derwicki of San Francisco, Son Gary Wilder of Cape Cod, and numerous nieces, nephews and grand children. Dana was in the Navy from 1951-1954. He then graduated from East Coast Aero Tech 1954-1956. He joined Northeast Airlines as an aircraft mechanic in 1956. He then transitioned to the Training Dept for Northeast Airlines from 1957-1968. His knowledge and understanding of aircraft systems did not go unnoticed by his students, Pilots and Flight Engineers. They encouraged him to get his own Pilots License and join them in Flight. In 1968 he transitioned again as a Pilot for Northeast Airlines, which was purchased by Delta Airlines. He finished his career with Delta in 1993 as a 767 Captain. He also flew the Boeing 727, 737, 757 as well as the Lockheed L-1011. During this time he also owned an Antique business with then wife Eleanor. Dana was a self-made man, a professional's professional. He is a member of numerous Masonic organizations. He earned his degrees in Scottish Rites and York Rites in NH and ME. After moving to Sarasota, Fl he earned his degree to become a Shriner and belonged to Sahib Shrine in Sarasota. Dana was very proud of the volunteer work he did, without hesitation in both the Masonic Lodges and Shriners organizations. He made many wonderful friends throughout his career and then retirement here in Sarasota and will surely be missed. Memorial and Celebration of Life will be held at a future date, to be announced. If you wish to make a donation in his name, Shriners Hospital or any Masonic Lodge would be greatly appreciated. Funeral arrangements are by Toale Brothers in Sarasota and condolences and more information can be seen on their website at www.ToaleBrothers.com. The family would like to thank the wonderful Nurses and Doctors at Doctors Hospital for their tireless efforts to get him through this terrible disease. God bless them and their families.

The family of Dana A Callanan, of Sarasota, Florida is sad to announce that Dana passed away on January 19, 2021. He was pre-deceased by his wife of 46 years, Eleanor Callanan, brothers David Callanan and Aaron Snow and sons Richard and Robert... View Obituary & Service Information

The family of Dana A Callanan created this Life Tributes page to make it easy to share your memories.

The family of Dana A Callanan, of Sarasota, Florida is sad to...

Send flowers to the Callanan family.