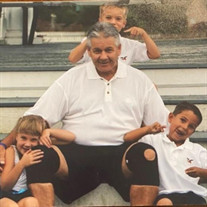 This is the story of David Charles Greene, whom was a wonderful man that was loved, is missed, and will always be cherished. Our “Papa / Pops” as he liked to be called by his grandchildren, “DG,” as he was called by his wife, was an amazing husband, father, son, and a friend like no other could be. David’s story starts on June 10, 1943, born in Chicago, IL the only child to Charlotte and Harry Greene. Charlotte divorced Harry when David was two years old. When Charlotte remarried Rudy Laskowski two years later, David’s love for sports began. Due to Rudy’s job as a minor league baseball manager, David moved a lot during his elementary school years (17 times to be exact), yet he was noticeably talented in sports and made friends easily wherever he went. When David was ready to enter high school, his family (which now included a half-brother, Rudy Jr.) finally settled in Lake Zurich, IL, where he attended Ela Vernon High School. Ela Vernon was where he would really grow up, make lifelong friends and excel in sports (football and baseball) leading to the all-star baseball team. After high school, David went to Parsons College for one year, worked for his stepfather a couple years and then got involved with law enforcement in 1965 with the Lake County Sheriff’s Office. He was injured in the line of duty, where he earned a Purple Heart for his bravery in 1976 and retired for medical reasons in 1980. David also spent five years in the US Marine Corp Reserves 1964-1969. Lake Zurich is where he would meet the love of his life, Karen Louise Link. David and Karen had a whirlwind romance and were married in the St Peters Church in Lake Zurich, December 6, 1969. David and Karen spent many hardworking years working and raising their two children, Melissa Ann born May 3, 1970 and Joel David born May 6, 1973 in Vernon Hills, IL. In 1980, David began working in the golf industry (and yes was an excellent golfer and had been playing many years prior with his stepfather). David’s first golf industry adventure began at Kemper Lakes Golf Course, where he was a golf instructor and manager and had the opportunity to meet, instruct and play with many memorable individuals like Bob Hope, Stan Makita, Walter Payton and Michael Jordan to name a few for you Chicago sport fans. David had many successful years managing various golf courses and was famous for his hard work and humor along the way. Everyone knew that when David showed up each morning, they had better do it right as he was from Chicago and liked to say it like it is. If you were going to do it half-assed you may as well not do it at all. In 1993, Karen and David retired and moved to Sarasota, FL because of the beautiful weather and golf courses. In retirement, David loved to golf once a week with his golf group at various golf courses, meet the “guys” at the “Dunk” (dunkin donuts) at 3pm Mon-Fri. but his greatest love was his family. The love he showed for his wife, his children and his grandchildren (Andrew James Kittelson / “AJ” whom is 19 years old, Samantha Kay Kittelson / “Sammie” 16 years old and Joseph Riley Greene, who had passed away due to ALD in 2014) cannot easily be described. His mission was to make sure his family knew how much they were loved and encouraged them to “live your life with no regrets”. David’s grand children were his heart and joy. There’s no denying that, his grandchildren stole his heart and he was there for all of them for support before a hockey game, funny text emojis when they were down, off key singing of happy birthday loudly on their phones when he couldn’t be there. On June 4, 2020, we lost a great man to a seven-year battle with cancer. A disease he fought hard to overcome with chemotherapy biweekly for over six years, which was scheduled around his weekly golf dates and his grandchildren’s hockey games. Loved ones that cleared the path for David are his father Harry Green, mother Charlotte Laskowski, stepfather Rudy Laskowski, his beloved grandson Riley Greene. Loved ones that will miss David until they meet again are his wife Karen Greene; his daughter Melissa Ann Kittelson; his son Joel David Greene; and his grandchildren AJ and Sammie Kittelson.

The family of David Charles Greene created this Life Tributes page to make it easy to share your memories.

This is the story of David Charles Greene, whom was a wonderful...

Send flowers to the Greene family.