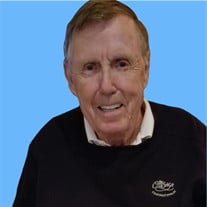 David Ernest Harrold died peacefully in his sleep on December 31, 2021, at his home in Longboat Key, Florida. He was born on February 27, 1939 in Wauseon, Ohio to Ernest and Katherine (Jenkins) Harrold and was raised in the Midwest. He received his bachelor’s degree from Hiram College in Hiram, Ohio and his master’s degree in business from Purdue University in West Lafayette, Indiana. He started his business career at General Mills in Minneapolis, Minnesota. A job with the Hanes Corporation took him to Winston-Salem, North Carolina, where he was given the responsibility for the development and test marketing of the iconic pantyhose in a plastic egg, L’eggs, for which he received several national awards. David proceeded to hold senior executive positions at Hanes and then the Sara Lee Corporation in Chicago, Illinois over the next 20-plus years, after which he provided consulting services to clients in the United States and Europe. David received a Distinguished Alumni Award from Purdue University and was an inducted fellow of the Garfield Society of Hiram College. He served on the Board of Trustees of Hiram College and the Board of Advisors of Purdue University and University of Illinois at Chicago. He was a Board member of the Winston-Salem United Way and the Chicago Chapter of the National Multiple Sclerosis Foundation. David had a passion for history, travel and sports. He enjoyed a good conversation and a good argument, often lacing either with a mischievous sense of humor and sharp wit. He loved good food, fine dining and, of course, his bartenders. David also cherished his homes with a view of the water, Lake Michigan in Chicago and his final home on Longboat Key where he loved to watch the sun set over the Gulf of Mexico. He was a “To Do” list planner, a grounded man with a dreamer’s heart. A man of accomplishment who strove to be a kind human, he had a strong desire to love and protect his children. David is survived by his sons, Michael Harrold and David Scott Harrold, his daughter Katherine Harrold, his sister Patricia Cowles and her husband Jim Cowles, his grandsons Michael Benfield and Jeremiah Miller, and his ex-wife Alice (Witenko) Harrold. He was predeceased by his beloved daughter Tameryn Benfield, his parents, and his second dad and mom, George and Virginia Witenko. David’s family will hold a memorial service and celebration of his life at St. Armands Key Lutheran Church, 40 North Adams Drive, Sarasota, on April 2 at 1:30 pm. In lieu of flowers, donations may be made to the National Multiple Sclerosis Society, www.nationalmssociety.org or the Pulmonary Fibrosis Foundation, www.pulmonaryfibrosis.org

David Ernest Harrold died peacefully in his sleep on December 31, 2021, at his home in Longboat Key, Florida. He was born on February 27, 1939 in Wauseon, Ohio to Ernest and Katherine (Jenkins) Harrold and was raised in the Midwest. He received... View Obituary & Service Information

The family of David Ernest Harrold created this Life Tributes page to make it easy to share your memories.

David Ernest Harrold died peacefully in his sleep on December...

Send flowers to the Harrold family.