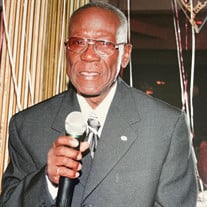 David Klass of 2550 Cover Lane North Port, FL departed this earth on a rainy Thursday morning on the 2nd of September 2021 at approximately 10:00am. He was born on 3rd June 1932 in a small town called Jonestown Mahaica, in the country of Guyana, South America to the late parents, Dorehis (Dolly) Roberts-Klass and Joseph Alexander Klass. David was the husband of the late Rubena Elaine Gill-Klass (1938-1998). He was the brother of the late Edna Klass Barnes, the late Bernice Letitia Klass, the late Basil Klass, and the late Alberta Klass-King. He is survived by two siblings, Olga Ramsey Casey and Vernon Klass. He was the father of Colin Klass, Sharon Klass and Marlene Karlin. Grandfather of Codeen Jamella Klass-Brown/Randy Brown, Justine Rubena Klass, Sophia Janine Klass/Fraser, Alexander Omar Klass-James, Sydney Karlin and Colin Daniel Klass. Great Grandfather of Chadae Somaya Harvey, Randi Olivia Brown, Jaylen Gouvia, Cody William Brown, and Sekani Daniel Klass Brother-in-law of Lynette Alexander and many others deceased Father-in-law of Lenox James, Todd Karlin and Myrtleen Klass Uncle of Avril Gill, Desmond Gravesande, Linden Kling, Karen Casey, Lansford Klass, Donna Gill, Evette Gill, Michelle Bennett and many others. He was the nephew, cousin and relative of the Lynche, Bruster, Harris, Roberts, Walters, Moffeth, McPherson, Semple, Greaves, McCurdy, Jackson, Nagamottoo, Klass from Florida, Texas, Berbice, Canada, London, France, and many more. Our dad was a great provider for his family and anyone who needed his help. He came from humble beginnings, but a rich culture filled with knowledge of numerous trades, including carpentry, electrician and tailoring which was evident in the way he was always smartly dressed. In his earlier career, he worked as a miner with friends, mining for gold and diamond and subsequently was employed with The Ministry of Guyana Geology and Mines. David migrated to the USA where he continued to expand his academic knowledge by acquiring his High School Diploma equivalency and began a new career with the Board of Education of the city of New York School Safety division. For 20 years, dad exemplified the greatest form of work ethics. He never took a sick day or reported late for work, retiring from The New York State Police Department in 2007. Our dad enjoyed listening and playing all genre of music, but his most enjoyable time was playing jazz and blues music for dancing the waltz and of course his instrumentals. On Sundays some of his favorites were Ace Cannon, Tom Jones, Ottis Redding and many more. He NEVER stopped being a husband, father, brother, grandfather, uncle, cousin or friend. He demanded respect and he gave the utmost respect. He held his head high and maintained his dignity, even in his illness. He never allowed anyone to take that away from him. WE WILL NEVER BE ABLE TO GIVE BACK WHAT HE HAS DONE FOR US. But We are thankful to God for every second of every minute of every hour that we were able to have our dad, Mr. David Alexander Klass, here in our presence. His legacy will live on in us, his uncompromising and unapologetic display of unwavering strength to defend his family in truth and grace. He was a force to be reckoned with. In our culture we all knew that ‘he didn’t play, and you had better have your ducks in a row before you approached him’. In all of that he was a very loving, and funny person, who loved to cook. (When he made a joke, you had to check to see if he was serious or joking...) Our dad was a very private person and thus we are going to honor his name and have a small viewing and service at Toale Brothers Funeral Home & Crematory, Ewing Chapel, 140 East Venice Avenue, Venice, FL 34285, on Friday September 10th, 2021, at 6-8pm.

David Klass of 2550 Cover Lane North Port, FL departed this earth on a rainy Thursday morning on the 2nd of September 2021 at approximately 10:00am. He was born on 3rd June 1932 in a small town called Jonestown Mahaica, in the country of Guyana,... View Obituary & Service Information

The family of David Alexander Klass created this Life Tributes page to make it easy to share your memories.

Send flowers to the Klass family.