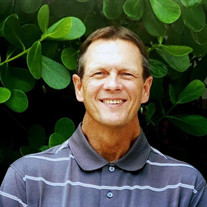 David Delynn Onan, age 65, passed away surrounded by family on May 25, 2020 at Sarasota Memorial Hospital in Sarasota, FL. He suffered from a prolonged illness that eventually claimed his life. David was born on December 16, 1954, in Quanah, Texas, to Charles and Ginger Cofer Onan. He lived in Oklahoma, Texas, Florida, Alabama, and Tennessee before settling in Sarasota. For a large portion of his career, David worked as a Senior Research Engineer for Halliburton Energy Services. David authored 13 technical papers and publications, held 29 U.S. and international patents, developed 16 commercial products and processes, and was selected as a Contributing Member of Halliburton’s Technical Personnel Recognition Program (TECH Ladder). He was a Registered Investment Representative with NASD and the SEC serving as Financial Principal and Financial Advisor while at Cumberland Securities, Inc. and later at A.G. Edwards. David’s passion, however, was the game of golf. David served as a golf professional during various periods of his life. His last position was being an Assistant Golf Professional at Stoneybrook Golf and Country Club in Sarasota. David attended Faith Baptist Church in Sarasota. His Christian faith was a hallmark of his life, and he was a godly example to all who knew him. He is preceded in death by his father and his sister, Leigh Smith. David is survived by his loving wife, Patty Onan; mother, Ginger Ayres of Sarasota, FL; daughter, Christina Onan of Lawton, OK; daughter, Amber Singletary and her husband Todd Singletary of Slidell, LA; son, Grant Totten of Oklahoma City, OK; grandson, Nicholas Onan of Lawton, OK; grandson, Jacob Richart of Oklahoma City, OK; niece, Parker Raye Smith of Sarasota, FL; half-sister, Tammy Brooks of Granite, OK; and half-sister, Dana DeSapio of Cedar Park, TX. A memorial service celebrating David’s life will be held on a future date. David will be dearly missed by friends and family.

David Delynn Onan, age 65, passed away surrounded by family on May 25, 2020 at Sarasota Memorial Hospital in Sarasota, FL. He suffered from a prolonged illness that eventually claimed his life. David was born on December 16, 1954, in Quanah,... View Obituary & Service Information

The family of David Delynn Onan created this Life Tributes page to make it easy to share your memories.

David Delynn Onan, age 65, passed away surrounded by family on...

Send flowers to the Onan family.