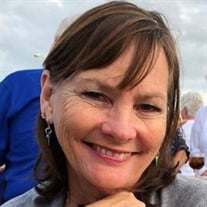 Deborah Kay Johnson, wife, mother and grandmother sadly passed away on January 12, 2021. She was with her husband of 36 years, Chris Johnson, at their home in Sarasota, Florida. Debbie was 63 years young, born on April 23, 1957 in Mobile, Alabama to parents Joyce Ann and James Seaman, both deceased. Debbie grew up with one brother and 3 sisters. She married Chris Johnson on June 2, 1984. She leaves behind a daughter and grandson, Adrian Farnon and Eoghan, who live in Atlanta, and a son Brian Johnson who lives in Sarasota. She was very close to her brother and sister-in-law, Steve and Gail Johnson and their daughters, Megan and Jennifer. Many of you may know Debbie as SP (Smarty Pants). She didn’t want to be called Grandma, (so that’s what her grandson called her and it stuck!) SP never stopped. She was on the go every chance she got. Most of her time was spent with family and friends, probably having a cocktail while strolling the beach looking for seashells. If she wasn’t on the beach, she was doing 5k walks with her friends, throwing dinner parties, driving to the market in her convertible on Saturday mornings, or just lounging by the pool. She made a career in the insurance field which she enjoyed until the day she got sick. She touched so many lives during her time here, and she will be missed more than you know. Debbie was a big part of a fun group of friends whose goal was to visit a different beach every month. She joined the Beach of the Month on their second beach outing and has been active with this group since that day in 2014. Debbie introduced the group to several beaches that aren’t even on the map! As many of you know, Debbie was diagnosed with brain cancer in May of 2018 and fought that battle until the very day she died. Moffitt Cancer Center played a very important role in that battle and we believe they truly prolonged Debbie’s life. Due to the unfortunate pandemic our world is facing, we will not be able to hold a memorial at this time. However, we will do a celebration of life in the next couple of months. We ask that any donations go to Moffitt in honor of Debbie. You can donate at the following link…moffitt.org/give.

Deborah Kay Johnson, wife, mother and grandmother sadly passed away on January 12, 2021. She was with her husband of 36 years, Chris Johnson, at their home in Sarasota, Florida. Debbie was 63 years young, born on April 23, 1957 in Mobile, Alabama... View Obituary & Service Information

The family of Deborah Kay Johnson created this Life Tributes page to make it easy to share your memories.

Send flowers to the Johnson family.