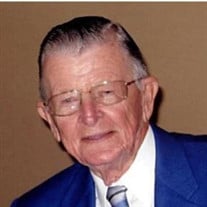 Donald Albert Fathauer passed away Tuesday morning December 29, 2020. Don was born July 17, 1925 in Cleveland, Ohio. He attended Parma Lutheran Church in Parma, Ohio where he was confirmed on Palm Sunday in 1937. Don attended John Muir Elementary School, Parma Schaaf Jr. High School and graduated from Parma Schaaf High School in 1943. After graduation he entered the Army Air Force Pilot School in 1943, while in training at Shaw Field in Sumter, South Carolina his class was removed for the convenience of the Air Force. After maintenance and gunnery school Don was a top turret gunner on B-24 bombers. He was discharged as Cpl., December 1945. Don married Joyce August 31, 1946. He worked in management for 11 years at Republic Steel Corporation in Cleveland, Ohio. In 1956 Don and Joyce moved to Sarasota, Florida and he was employed by the U.S. postal service where he retired in 1985 after 30 years of service. He was president of Concordia Lutheran Church and held many other offices on the church board over the years. After retirement, Don and Joyce trailered in 49 states and all Canadian Provinces and some in Mexico. They belonged to the Wally Byam Caravan Club International and went on 11 caravans and one barge trip in Louisiana. Don enjoyed bowling, golfing and card games. He is survived by his beloved wife of 74 years, Joyce Fathauer; daughter, Joyanne Fathauer; son, Jon Fathauer and his wife, Norma and two grandchildren. A memorial service will be held 1:00 PM, Saturday January 9, 2021 at Concordia Lutheran Church, 2185 Wood Street, Sarasota, Florida 34237. In lieu of flowers, memorials in Don’s honor may be made to Concordia Lutheran Church, 2185 Wood Street, Sarasota, Florida 34237. Interment will be at Sarasota National Cemetery at a later date.

The family of Donald Albert Fathauer created this Life Tributes page to make it easy to share your memories.

Send flowers to the Fathauer family.