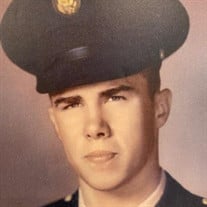 The grand “story teller” has now...a devine audience in Heaven. Donald, with his unique ability to captivate everyone he knew, passed away into God’s waiting arms at 75 years young. He had a profound gift, and that was of giving to others....in words and in thoughts...never wanting anything in return. An amazing man with immeasurable patience and tolerance; he was a neverending source of laughter and joy. Donald was the son of Hugh Osborne Findlay from Scottland and Thelma Irene Voutier from Nova Scotia. Donald was a loving and caring father, sister, brother, grandfather, and friend. Born in Detroit, Michigan, and raised in Union Lake, Michigan. Upon high school graduation, he entered Michigan State University with a wrestling scholarship, with the ultimate hopes of becoming a sports commentator, with numerous friends commenting that Don was a “sports encyclopedia”. He was then drafted out of college and into the U.S. Army in 1967 and joined his band of brothers in Viet Nam. There he served proudly and with valor, earning 2 Purple Hearts, before coming home and completing his Bachelors Degree. Donald then married Sherry Norton, and together they raised a beautiful daughter, Angela. He moved to Sarasota in 1978 and enjoyed many years of love, family, friends, art, dining, and travel. Angela and her husband Mike gave birth to three glorious grandchildren, giving Donald many years of shear joy and happiness as he often would refine his story-telling expertise with his grandchildren. In his younger professional life, he worked for Burton Abstract & Title, Hearts Mountain and other firms in marketing and sales. However, the absolute passion of his life was working as a volunteer at the Springs at Lakepointe Woods in Sarasota, Florida, where he was recognized in 2018 by The Florida Healthcare Association receiving The Adult Volunteer of The Year Award for outstanding contributions as a volunteer to the residents and staff. This phase of his life, at “The Springs”, would be very full-filling for him. This is where he met and developed his beautiful friendships with what Donald called...”his work wives”. They were, simply put, the “4-musketeers”. Donald is survived by his sister, Joanne Bradshaw and her loving husband John of Bradenton, Florida and Angela DeRoche and her loving husband Mike of Indialantic, Florida. He also had three grandchildren, Alyssa, Connor and Olivia...the loves of his life. Donald will be greatly missed by all of his family, his friends who adored him, and all the sports enthusiasts out there! We thank God for giving him to us and for his life well lived. Services will be held at 1:30PM March 25, at Sarasota National Cemetery with a celebration of Donalds life at 3PM Marina Jacks.

The grand &#8220;story teller&#8221; has now...a devine audience in Heaven. Donald, with his unique ability to captivate everyone he knew, passed away into God&#8217;s waiting arms at 75 years young. He had a profound gift, and that was of giving... View Obituary & Service Information

The family of Donald Robert Findlay created this Life Tributes page to make it easy to share your memories.

The grand “story teller” has now...a devine audience in Heaven....