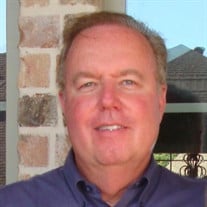 Donald Curtis Ramp of Lakewood Ranch, FL, and formerly Frisco, TX, passed away on February 18, 2022, at age 69 after a 21-year battle with Parkinson’s Disease. He is survived by his wife, Barbara; his brothers, Lawrence (Kathleen) of Costa Mesa, CA, and Stephen (Janus) of Herndon, VA; and niece, Hilary, of Richmond, VA. He was preceded in death by his parents, Edwin and Margaret. Don grew up in Southern CA, and was a graduate of Occidental College in Los Angeles and received an MBA from Trinity University in San Antonio. He loved his career in sales. Whether it was mutual funds, human resources software, or eCommerce software, Don was always working his magic for his customers. But work didn’t define him. He had a passion for boating, fast cars, nature, wildlife of all kinds, high tech, the stock market, politics, travel, and adventure. Highlights of his adventures included bear hunting in Alaska, photo safaris, helicopter and hang gliding rides, climbing Mount Kilimanjaro in Tanzania, and even a course in high performance driving. Anyone who knew Don will remember him as thoughtful, intelligent, quick to laugh, and above all, kind. A strong individualist with a sweet and caring nature, Don pursued all aspects of his life from a place of integrity and confident action without taking himself too seriously. From skiing the slopes near Lake Tahoe (where he proposed to his “Forever Valentine”) to riding his Harley Davidson, or simply dining at his favorite Del Frisco’s, Don’s irrepressible enjoyment of life shone through. His later years were blessed by many on “Team Ramp”. These are the warriors that kept Don afloat! Special mention of Teresa, Esther, Amy, and the staff at Grand Living at Lakewood Ranch. There will not be any services held at this time. In lieu of flowers, the family would welcome a donation to Dallas Area Parkinson’s Society, a program that Don participated in for years, or to a charity of your choice. To make a donation to the Dallas Area Parkinson’s Society, go to: https://donate.daps.org/donations/memorial-and-honor

Donald Curtis Ramp of Lakewood Ranch, FL, and formerly Frisco, TX, passed away on February 18, 2022, at age 69 after a 21-year battle with Parkinson&#8217;s Disease. He is survived by his wife, Barbara; his brothers, Lawrence (Kathleen) of Costa... View Obituary & Service Information

The family of Donald Curtis Ramp created this Life Tributes page to make it easy to share your memories.

Send flowers to the Ramp family.