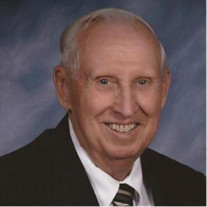 Donald E. Schroeder, age 86, passed away Saturday, October 31, 2020 at Mary Washington Hospital in Fredericksburg, Virginia. He was born November 15, 1933 in Milwaukee, Wisconsin. He was the son of Emil Carl Gustav Schroeder and Helene Adeline (Vollbrecht) Schroeder. He was a member of the Church of Jesus Christ of Latter-day Saints since 1962. He was a Navy veteran, teacher, sports coach, journalist, sports editor, photographer, businessman, and co-founder of the Pioneer Tennis Club. He enjoyed tennis, basketball, golf, and serving community interest in various callings at church. He is remembered for having promoted the development of coaching, sports, and athletic facilities, nationally at high school and collegiate levels. He was a graduate of Milwaukee Riverside High School (’52), and the University of Wisconsin (’56), having earned a B.S. degree in Physical Education. Upon graduation, he served two years on active duty in the U.S. Navy at Kami Seya, Japan as a Radioman / Communications Technician. He married his first wife, Dona, in 1958 and worked as Boys Physical Director at the Milwaukee New Central YMCA. He began his career as an educator in Wisconsin public schools in 1959, teaching and coaching sports around the state in Milwaukee, Grant County, Horicon, Reedsville, and Cedarburg, where he retired from teaching and coaching after 22 years. During the last 13 years of that time, while living in Grafton and Cedarburg, he concurrently served as Sports Editor and journalist at the News Graphic local newspaper. In 1980, his family moved to Indianapolis, IN where he began a business in sports photography, as franchise owner in the Visual Sports Network, serving the entire state of Indiana, which he expanded and eventually retired from after selling his business in 1994. After Dona’s passing in 1998, he married his second wife, Betty, in 1999 and soon thereafter moved in retirement to Venice, FL in 2001. After Betty’s passing in 2017, he sold his Venice home and moved nearer to family in Virginia. He is survived by his two sons, Douglas (Connie) Schroeder of Stafford, VA and Jeffrey (Sandra) Schroeder of Indianapolis, IN. Also by eight grandchildren; Kinsley Schroeder of Salt Lake City, UT; Margaret Schroeder of West Jordan, UT; Andrew Schroeder of Fairfax, VA; Elaine (James) Myers of Front Royal, VA; Caroline (Luis) Barrezueta of Minot, ND; Natalie (Jared) Rosequist of North Las Vegas, NV; JoSonya (Nathan) Johnson of Rexburg, ID; and Brian Schroeder of Stafford, VA. Also, by six great-grandchildren; Remi and Briar Rosequist, Emma and Lucas Myers, Marianna Barrezueta, and Hadley Johnson. Also, by two step-children; Daniel and Deborah Dunkin. Also, by his beloved cat, Beau. He was preceded in death by his first wife of 40 years, Dona Jean (Passehl) Schroeder, and his second wife of 18 years, Betty Ann (Bogue) Dunkin Schroeder. Also, his three sisters; Lowine Wickham, Delores Minkel, and Betty Lou Reinheimer. A private interment will be held at the Sarasota National Cemetery. Memorial donations in lieu of flowers may be made to the Veteran’s Administration Medical Center, Southpoint Campus, Fredericksburg, Virginia or to the Veteran’s Administration Medical Center nearest you. Arrangements by Toale Brothers Funeral Home, Ewing Chapel, Venice.

The family of Donald Schroeder created this Life Tributes page to make it easy to share your memories.

Send flowers to the Schroeder family.