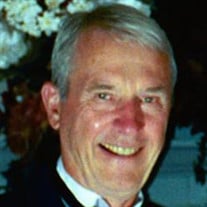 Donald Robert Schultz, a prominent business leader from Toledo, Ohio and loving husband, father, grandfather and uncle, passed away on November 9, 2020 in Sarasota, Florida. A passionate outdoorsman, landscaper, reader, chef and world traveler, he spent his life focused on family and giving back to his community through his profession and many charitable endeavors. Born on January 21, 1929, in Point Place, Ohio, Don grew up on Indiana Avenue in Toledo, Ohio. After graduating from Scott High School in 1946, Don enlisted in the Army Air Force where he was assigned to Lowry Air Force Base in Denver, Colorado. After his honorable discharge in 1949, Don enrolled at Michigan State University and joined the National Guard’s 37th Division at Camp Polk Louisiana. Prior to his honorable discharge in 1953, Don enrolled at the University of Toledo, graduating in June, 1955 with a degree in Business Administration. During his studies, he was introduced to his future wife, Marilyn Heuerman, on a blind date. After marrying in July, 1955, Don and Marilyn moved to a new home in south Toledo where they lived for the next 40 years raising their daughters, Susan and Linda. Armed with his Business degree and passion for landscaping, Don directed sales for the Secor Landscape Company for several years after college. In 1960, Don joined the R.G. Haley Company where he held various commercial positions which facilitated significant travel throughout the US and Canada. After five years, including a lengthy assignment in Washington State, Don joined the Toledo Edison company in 1965. During the next 30 years, Don held various leadership positions at the company related to sales and economic development. Two of his most cherished roles involved directing downtown Toledo riverfront development and the refurbishment of the Erie Street Market where as a young boy, he delivered produce from his first job on a friend’s farm. Don retired in December, 1990, but his endless energy and dedication to giving back led him to direct projects for several charitable organizations including the United Way, the Mental Health Board, and the Toledo Board of Education. His love for landscaping never faded, and he led a multi-year neighborhood project to beautify and improve Copland Park which garnered several awards from the City of Toledo. In 2002, Don and Marilyn moved to a golf community in Sarasota, Florida where he enjoyed spending time with his daughters and grandchildren who lived nearby and visited frequently. He continued his history of volunteerism by directing numerous projects for the City and County of Sarasota, one of which resulted in significant long-term improvements to the roads and commercial centers near his home. Woven throughout Don’s life were his passions for gardening, reading, cooking, fishing, sports and travelling, the latter which seemed to be part of his internal core, potentially inherited from his immigrant German grandparents. A copy of National Geographic magazine was always within his reach, along with assorted maps, and an outline of the next annual family vacation jotted down on a notepad. Over his lifetime, Don traveled to every state in the Union, as well as to Canada, Latin America and Europe. He was an expert planner and enjoyed investing in timeshares because they gave him the flexibility to travel to new destinations while being a property owner. Treasured vacations with his family included a trip to Germany to see an ancestor’s original farm, a cruise through the Hawaiian Islands, a tour of Napa Valley vineyards, multiple trips to Spain and Latin America, summer vacations in Bellaire, Michigan, and annual vacations to Myrtle Beach, South Carolina after retirement. Don is survived by his wife Marilyn (Heuerman) Schultz, daughters Susan (Glen) Adams and Linda Calvin, grandchildren Jocelyn and Grant Calvin, brother-in-law Ralph Heuerman, niece Christine Lemay, and nephews Bruce (Karen) Shane, Kurt (Barbara) Heuerman and Karl (Elise) Heuerman. Don is predeceased by his Parents, Louise (Albright) and Henry Schultz, Sisters Wanda (Bob) Erkert and Phyllis (Ed) Shane, sister-in-law Janet Heuerman, and nephew Mathew Shane. A Celebration of Life for Don will be deferred until a later date due to the current challenging times. Don’s ashes will be interred, with Military Honors, in the Sarasota National Cemetery, Wall of Honor. In lieu of flowers, Don would be touched if you could plant a tree, shrub or favorite flower in his memory, donate to a charity meaningful to you, or contribute to the National Geographic Society. “One touch of nature makes the whole world kin.” – William Shakespeare

The family of Donald Robert Schultz created this Life Tributes page to make it easy to share your memories.

Send flowers to the Schultz family.