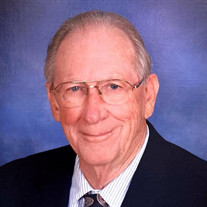 Donnell Lynn Burgett, 90, of Sarasota, Florida passed into life eternal on February 16 after a beautiful life full of love and laughter. Don was born on August 25, 1930 to Aurelia and Lynn Burgett in Cincinnati, Ohio. After graduating from Norwood High School, he joined the Navy serving nearly four adventurous years, including crossing the Arctic Circle on June 15, 1951. Don’s service provided stories and memories that entertained family and friends over the years – like the time he shimmied through the mess portal to snatch ice cream from the freezer for his buddies, got caught and as punishment had to repair the long-broken ice cream machine, delighting the entire crew! After discharge from the Navy, Don followed in his father’s footsteps joining the General Motors Company at the Fisher Body plant in Norwood, Ohio as Tool & Die Maker. He spent nearly 35 years with GM, enjoying all the challenges of building cars, such as the Camaro and Firebird, as technology evolved. In both the Navy and at GM, Don was deeply respected as the man to depend on to get the job done, in an ingenious way, and at the highest level of quality. If you wanted something done the best, Don was your man. As an example, one of his solutions won an award and engineers traveled from England to learn from him and replicate his solution at their facility. Don married Doris June in 1956, after a courtship including dancing under the stars in Ault Park and a Valentine’s Day engagement. They were married for 52 wonderful years, fully devoting their lives to raising and doting on their two daughters. Don and Doris were always up to something fun together during their years of retirement, from daily excursions to the Siesta Key beach, to parties with friends and family, to making beautiful stained glass art creations which now grace their grandkids’ homes as precious family heirlooms. In 2007 they moved to Bay Village of Sarasota, and immediately felt at home in the very special community of wonderful residents and world class caregivers and staff. And, years after Doris’ passing, Don met his delightful companion Hedy Boyd at Bay Village. Those who know Don know that he was the most loving father and spouse a family could ever imagine, and he liked to joke, laugh and spread smiles to all. His caring smile warmed many hearts over the years! He enjoyed all things mechanical, especially his cars, and was always building new gadgets to creatively solve daily household problems. Don was also renowned for his love of taking care of the lawn and landscaping year round, as he continued to do up until his passing. And, at Christmas time he took great care in beautifully decorating the yard and house with lights, fearlessly climbing to the top of a large oak tree to place a huge star that was visible in the night sky for what seemed like miles. Don was preceded in death by Doris, and is survived by his adoring daughters Holly Lorenz and Heather Burgett (Jim Gajkowski), his beloved grandchildren Michael Lorenz (Lauren) and Keith Lorenz (Mandy), and his great grandchildren Owen, Gabe and Millie Rose. Don will be dearly missed, and celebrated, by all of the family and friends who were truly blessed to share life with him. The family requests that any notes are sent in Don’s name to Bay Village of Sarasota (8400 Vamo Road, Sarasota FL 34231), where they will be forwarded to the family. Please consider a donation to Tidewell Hospice, or your local hospice. www.tidewellfoundation.org/donate Funeral service details are still being worked out.

Donnell Lynn Burgett, 90, of Sarasota, Florida passed into life eternal on February 16 after a beautiful life full of love and laughter. Don was born on August 25, 1930 to Aurelia and Lynn Burgett in Cincinnati, Ohio. After graduating from... View Obituary & Service Information

The family of Donnell Lynn Burgett created this Life Tributes page to make it easy to share your memories.

Send flowers to the Burgett family.