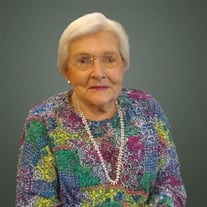 DOROTHY (DOTTYE) HERITAGE December 12, 1926 – March 23, 2020 Dottye was born in Dayton, Ohio, to Russell and Mabel Kanouse. She grew up in Dayton and graduated from Oakwood High School. For one year after graduation, she worked as a secretary to 3 generals at Wright Patterson Air Force Base before attending Bowling Green State University in Bowling Green, Ohio. While at BGSU she was a member and subsequent president of Alpha Gamma Delta sorority and BGSU is where she met her husband, Jack. Jack and Dottye married in 1949 and moved to Sarasota after living in Chicago for 2 years while Jack attended graduate school. Since Sarasota was a sleepy village when they arrived in 1951, there were many opportunities for both of them to be involved in the founding of several organizations. Dottye was a charter member of the Jr. Welfare League (presently the Junior League of Sarasota), Sarasota Panhellenic Alumnae Association, and she and Jack were charter members of the Church of the Palms on Bee Ridge Road. After her 4 children were in school she went to work as a business teacher (primarily accounting) at Sarasota High School where she taught for 18 years. After her retirement she and Jack traveled extensively and split their time between their homes in Sarasota and Maggie Valley, NC. Dottye always enjoyed telling of having met Orville Wright who lived in her Oakwood neighborhood in Dayton. She was a member of the Campfire Girls and the girls were collecting used grease for the war effort and went to his home where he invited them in for a brief visit. In later years she was active in her sorority alumnae group as well as in the tutoring program at Church of the Palms. For many years she played in a regular bridge game on Monday afternoons which continued at her assisted living after she gave up her original Sarasota family home in which she had lived for 65 years. She is predeceased by her husband, Jack (2009) and is survived by her 4 children, Ellen Heritage (Mark Avery) of Sarasota, Billye Stampelos (Charlie) of Tallahassee, Ben Heritage (Carol Sue) of Bradenton, and Dena Mims (Dan) of Lake Toxaway, NC. She has 4 grandsons and 2 great-grandchildren. There will be no formal service and her cremation is being handled by Toale Brothers Funeral Home. In lieu of flowers memorial donations may be made to the tutoring program at CHURCH OF THE PALMS and sent to Linda Evans, Director of Tutoring, Church of the Palms, 3224 Bee Ridge Rd., Sarasota, FL 34239. Please note “Back to Basics Tutoring” in the memo line.

DOROTHY (DOTTYE) HERITAGE December 12, 1926 &#8211; March 23, 2020 Dottye was born in Dayton, Ohio, to Russell and Mabel Kanouse. She grew up in Dayton and graduated from Oakwood High School. For one year after graduation, she worked as a... View Obituary & Service Information

The family of Dorothy (Dottye) Heritage created this Life Tributes page to make it easy to share your memories.

Send flowers to the Heritage family.