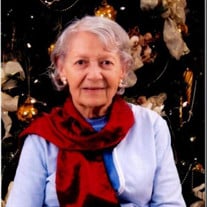 Dorothy Jane Roenick went home to be with the Lord on December 17, 2021. She is survived by her son Gary Moyer (Karen), daughter Kristie Moore (John), grandchildren Collin, Ryan and Katherine Moore and James and Dawn Roenick, five great grandchildren and three great-great grandchildren. Dorothy was born April 7, 1927 to Walter and Helen Hejnicki of Toledo, Ohio, the middle of seven siblings. After her father died unexpectedly at 42, Dorothy attended barber school and at 16 become Toledo’s first female barber. Following an unexpected divorce, she raised Gary in Hawaii and Toledo as a single working mom and salon owner, which was very uncommon in the 1950s, until her marriage in 1965 to the love of her life, Lester Roenick. Dorothy and Les were surprised with a later in life gift of Kristie, and again did something uncommon, raising her as older parents in the 1970s. They relocated to Sarasota in 1986 upon Les’ retirement from Jeep. Dorothy was a tireless prayer warrior, leading prayer lines at her church in Toledo and then founding the prayer line at St. Michael’s on Siesta Key and operating it for 15 years. Countless people can thank the prayers they received to Dorothy’s faithfulness. Dorothy had an infectious smile, was a person to lift everyone’s spirits, and always encouraged those around her. She was an amazing mother and mother-in-law, loving wife, and devoted grandmother. She was the hostess of all hostesses, having family holiday gatherings and making her home everybody’s second home. She could listen in a way that made you feel special, and she could tell a story with incredible imagination. She loved her friends deeply, and truly enjoyed the friends she made at Alderman Oaks and the Pines of Sarasota in her later years. Dorothy had a saying “Breath in Jesus, exhale self.” Mom, we know your heavenly lungs are full of Jesus right now! In lieu of flowers, memorial donations may be made to St. Michael’s the Archangel at 5394 Midnight Pass, Sarasota FL. 34242 or to the Pines of Sarasota Foundation, at pinesofsarasota.org. 6884567.v1

The family of Dorothy Jane Roenick created this Life Tributes page to make it easy to share your memories.

Dorothy Jane Roenick went home to be with the Lord on December...

Send flowers to the Roenick family.