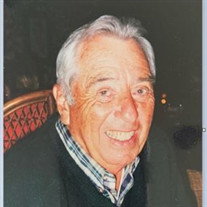 Dr. Victor S. Morrison, 94 passed away peacefully on April 1, 2022, in Sarasota, Florida. He was born on December 28, 1927, in Harrisburg, Pennsylvania to Helen and Hyman Morrison. Victor attended Pennsylvania College of Optometry, before graduating William Penn High School, making him ineligible to play tennis senior year, much to the dismay of teammates. According to the Harrisburg Patriot News, “Vicky, the diminutive captain was the last of the line of the famous Morrison brothers, who have made tennis history at the uptown school during the past ten years.” Enlisted in the army in October of 1946, two years short of his medical degree, he was sent oversees to the Station Hospital in Linz, Austria, where he ran the eye clinic. Tennis opened doors for Victor. In Vienna, he won a tennis tournament for the service men. As a result, his picture was on the magazine cover for USFA. He was invited to play Jr. Davis Cup competition (a forerunner to playing the circuit) in 1949 but had to decline because of educational requirements. He brought indoor tennis to Central Pennsylvania, having built and operated the Racquet Club East in Harrisburg, and later the Racquet Club West in Mechanicsburg. In 1995, Vic was inducted to the Pennsylvania Sports Hall of Fame, West Shore Chapter. He practiced optometry in Mechanicsburg, PA for over fifty years. Adored and admired by his patients, he made safety glasses for the Mechanicsburg Naval Supply Depot. Active member of the Mechanicsburg Rotary and president of the Mechanicsburg United Fund, he always had the latest and most fashionable frames. He is survived by his beloved and “beautiful”(as he referred to her) wife of 62 years, Barbara Berg Morrison, son Daniel H. Morrison, daughter Nancy Morrison Levitt, her husband Peter Levitt, grandsons Ben and Adrian, his sister Barbara Morrison Eller, sister-in-law Julia Berg Fainsilber, her husband Adrien, 11 first cousins, 11 nieces and nephews, and countless great cousins devoted all to their Uncle Vic. In addition to his parents, he is predeceased by his brothers Allan and Robert. His wit, easy going charm, and warmth with be missed by his family, numerous friends and patients. A memorial service will be held at 11:00 AM Monday April 4, 2022, at Toale Brothers Funeral Home, 40 North Orange Avenue Sarasota, Florida 34236 with a reception to follow. The service may be viewed at the following link: www.moonbeamvideocasting.com\mblivestream3 Memorials may be made in Dr. Morrison’s honor to The All Faiths Food Bank and Tidewell Hospice. Topic: Shiva for Dr. Victor Morrison with Rabbi Peter Kessler Time: Apr 4, 2022 07:30 PM Eastern Time (US and Canada) Join Zoom Meeting https://us02web.zoom.us/j/8464840272 Meeting ID: 846 484 0272 One tap mobile +13017158592,,8464840272# US (Washington DC) +13126266799,,8464840272# US (Chicago) Dial by your location +1 301 715 8592 US (Washington DC)

Dr. Victor S. Morrison, 94 passed away peacefully on April 1, 2022, in Sarasota, Florida. He was born on December 28, 1927, in Harrisburg, Pennsylvania to Helen and Hyman Morrison. Victor attended Pennsylvania College of Optometry, before... View Obituary & Service Information

The family of Dr. Victor S. Morrison created this Life Tributes page to make it easy to share your memories.

Send flowers to the Morrison family.