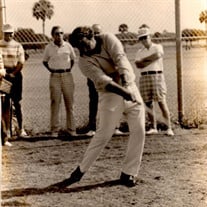 Duncan A. Clark, Jr., born November 2, 1941 in Clinton, S.C., died Saturday June 12, 2021 in the care of hospice while a resident of The Springs at South Biscayne in North Port, Florida. He is preceded in death by his parents, Archie and Louise Clark. He is survived by his wife of 42 years, Susan (Patterson) Clark, sons Nicholas of Orlando, Christopher of North Port, Steven of Connecticut, sister Eloise Barlow of Jacksonville, several nieces, nephews and grandchildren. He grew up in a golf-rich tradition family in Fayetteville, NC, where his dad was the club professional at Highland Country Club, and his uncle was a long-time PGA club professional at the Officer’s Club at Fort Bragg, who played in the first Masters. Duncan had a brief stint on the PGA tour then spent the rest of his golf career as a PGA club professional ending with the honor of half-century status with the PGA of America. He was most-notably recognized as the director of golf at Heron Creek Country Club in North Port, Florida from its inception until his retirement in 2010. He was strongly dedicated to the enrichment of junior golf programs at each club where he was employed. In his several decades of tenure with the sport, he instructed players of all ages; teaching the novice beginner the fundamentals of the game, helping to hone the skills of advanced players and even tweaking the swings of fellow professionals. Over the many years he met many wonderful people through golf and developed long-lasting friendships. A celebration of life will be held at a later date. In lieu of flowers, donations can be made in Duncan’s name to the Joe Turnesa Memorial Scholarship Fund through the Community Foundation of Sarasota County, 2635 Fruitville Rd. Sarasota, FL 34237 or to the Humane Society of Sarasota County, 2331 15th Street Sarasota, FL 34237.

Duncan A. Clark, Jr., born November 2, 1941 in Clinton, S.C., died Saturday June 12, 2021 in the care of hospice while a resident of The Springs at South Biscayne in North Port, Florida. He is preceded in death by his parents, Archie and Louise... View Obituary & Service Information

The family of Duncan A. Clark, Jr. created this Life Tributes page to make it easy to share your memories.

Send flowers to the Clark, family.