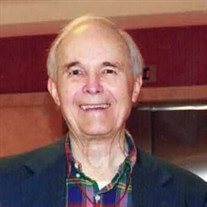 E. Erskine Hopkins was born September 21, 1924 in Birmingham, Alabama to the late Charles Beverley and Iva (Veltman) Hopkins who were in a quandry, they had expected a girl for their second child and had no names picked out for a boy. His Aunt came to the rescue with the suggestion he be named after his two bald-headed uncles, thus was Elbert Erskine Hopkins christened. He preferred to go by Erskine but was affectionately know as Pops, Erky, Hop or just EE. He passed away peacefully on February 13, 2022 in Sarasota Florida at the age of 97.5, a long life well lived. He and his late older brother, Charles Beverley Hopkins Jr. grew up in Homewood, Alabama, at the time a working-class suburb of Birmingham. He attended Auburn University, graduating in 1946 with a BS in Chemical Engineering, followed by graduate work at the University of Alabama, earning a MS in Physical Chemistry. Following graduation, he was hired by the precursor to the NSA, the Armed Forces Security Agency (AFSA) in Washington DC. In 1955, while in Washington, Erskine was a parishioner and was also singing (baritone) in the choir at Saint John’s Church of the Presidents in Lafayette Square, where he met a fellow choir-member, who turned out to be the love of his life, Mary Jo. After a whirlwind courtship, Erskine and Mary Jo were married in a ceremony attended by a number of high-ranking government officials and military generals who knew Mary Jo from her job in the US Navy in the Pentagon. Almost immediately, Erskine received a job offer from the DuPont company, which took them to Buffalo New York for three years, where their first two sons, David and Steven were born. In 1959, Erskine was transferred to Wilmington Delaware, where their children Thomas, Edward, and Nancy were born, and where they lived happily until the year 1999, when they retired to Sarasota Florida. Always a soft-spoken man, when talking about Erskine, the phrase "still waters run deep" always leaps to mind. Erskine was a true Southern gentleman, thoughtful in his ways and a lover of classical music who loved his family above all else. He will be greatly missed by his loving wife of 67 years, Mary Jo, and his children: son David (Cheryl), son Steven, son Thomas, daughter Nancy, granddaughter Alison (Gavi), and great granddaughter Shira; predeceased by son Edward (1989). A memorial service will be held on Saturday April 23 at 10:30 am at St. Boniface Episcopal Church, 5615 Midnight Pass Road, Sarasota, FL 34242. In lieu of flowers please consider donations to St. Boniface Church or a charity of your choice.

E. Erskine Hopkins was born September 21, 1924 in Birmingham, Alabama to the late Charles Beverley and Iva (Veltman) Hopkins who were in a quandry, they had expected a girl for their second child and had no names picked out for a boy. His Aunt... View Obituary & Service Information

The family of E. Erskine Hopkins created this Life Tributes page to make it easy to share your memories.

Send flowers to the Hopkins family.