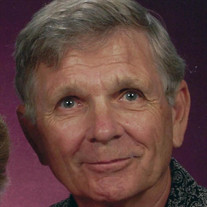 It is with great sadness that we announce the passing of Edgar Raymond Crozier Jr., known as Ray, Dad and Grandad. He was 90 years old. He was survived by his wife of 68 years, Kathleen, known as Kay, (yes, Ray & Kay), his sister Rosemary (Dick) and his three children (May, Jay & Fay – just kidding): Pat (Kevin), Steve and Jenny (Peter) and eight grandchildren: Katie (Matt), Sam, Nick, Dave, Nate, Jessie, Chris and Dan. He was preceded in death by his mother Charline, father Edgar Raymond Sr. and granddaughter Rebecca. Ray was born in Bangor, ME. He graduated from High School in Stonington which is a coastal town located on the southern tip of Deer Isle. He participated in all sports from baseball to basketball. While in Boy Scouts he achieved the highest rank of Eagle Scout which is only earned by 4% of Scouts. He was also awarded the God and Country award. Ray continued his education at the University of Maine where he earned a business degree. It was here where his life would change forever. During a college dance Ray and his friend noticed two girls standing together across the room. Contrary to his friend’s desires, Ray ran across the gym and asked Kay to dance. They were married a few years later. After graduation, Ray enlisted in the Navy and enrolled in officer’s training school. He served 3 years and held several positions including gunnery officer. The Navy enabled him to travel all over the world. Ray made friends everywhere he went. His infectious laugh and big personality drew crowds. After leaving Maine, Ray lived in numerous states including RI, CA, NY (twice), NH, PA (3 times), GA, MI and finally retired in Sarasota, FL. He boasts he has been in every state in the US except one - North Dakota. He began his long career with Scott Paper Company working as a salesman in Manhattan. He fondly referred to himself as a toilet paper peddler. After his retirement, he continued to work for Scott in a different capacity, organizing and running seminars for customers on improving business. This career change was a smooth transition as he loved public speaking and participated in and ran several Toast Master groups. Ray lived his life to the fullest. He had so many interests. And when Ray did anything it was big. When he began gardening, he had every imaginable vegetable/fruit. His garden was fenced off with paths leading to each vegetable. His competitive nature showed itself in learning the game of tennis, eventually going on to compete. Moving to Florida sparked his interest in baking, specializing in cookies and bread. One of Ray’s greatest achievements was running in the Boston Marathon. He competed when he was 50 years old. When Ray was 78 years old he seriously contemplated training again. He felt he could make the top 5 in the “over 80” category. That is, if there is an “over 80” category. Sadly for Ray, Kay shut down the idea. Ray loved his family. For 19 years he took the entire family to Jamaica for a week of fun. This was the most important week of the year for the family. We dined together every night and forced Ray to play games despite his objections. Ray was a faithful Christian and fully involved in every church he attended. He taught Sunday school, was a deacon, on several boards and when living at Arden Court, he lead grace at meals. His love of the Lord is evident through everything he did. Ray devoted his time to several charities both physically and financially. He supported numerous children in third world countries. Several times a week he would do laundry for the homeless. He worked with the local school tutoring students in reading. While living at Sunnyside he ministered to patients in the nursing home twice a week until Covid restrictions closed the facility to visitors. We miss you dad! We love you dad! God loves you and now you are home! We will see you again someday. 1 Thessalonians 4: 13-14 Brothers and sisters, we do not want you to be uninformed about those who sleep in death, so that you do not grieve like the rest of mankind, who have no hope. For we believe that Jesus died and rose again, and so we believe that God will bring with Jesus those who have fallen asleep in Him. ++ Funeral services will be held on Monday, June 20, 2022 at Sarasota National Cemetery located at 9810 State Road 72, Sarasota FL, 34241. Service begins at 1pm.

It is with great sadness that we announce the passing of Edgar Raymond Crozier Jr., known as Ray, Dad and Grandad. He was 90 years old. He was survived by his wife of 68 years, Kathleen, known as Kay, (yes, Ray & Kay), his sister Rosemary... View Obituary & Service Information

The family of Edgar Raymond Crozier Jr. created this Life Tributes page to make it easy to share your memories.

It is with great sadness that we announce the passing of Edgar...

Send flowers to the Crozier family.