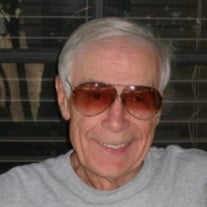 On Tuesday, January 11, 2022, Edmund George Vimond Jr. (E.G.), beloved husband, father, grandfather, brother, and long-time resident of Sarasota, Florida and Bedminster, New Jersey passed away at the age of 86. E.G. was born on May 30, 1935 in Toledo, Ohio to Edmund and Bertha Squires Vimond. After graduating from Burnham High School in Sylvania, Ohio, E.G. earned a scholarship to Northwestern University in Evanston, Illinois where he earned a Bachelor of Science in Business Administration in 1957, and subsequently received his Master of Business Administration from Northwestern University’s The School of Business, now formally known as the Kellogg School of Management, in 1958. E.G. was an outstanding student, a proud member of Delta Tau Delta and a teaching assistant in the business program while achieving his MBA. On September 23, 1956, E.G. married the love of his life, Pamela Jolie Thompson, also a student at Northwestern University, in Marion, Indiana. E.G. proudly provided service for the United States Marine Corp (USMCR 3rdBn, 1stITH, MCB) at Camp LeJeune in NC from June 25 – December 24, 1958. After six months of active duty, he was relieved with Honorable Service and acted on reserve until June 8, 1964. Following his service, E.G. and Pamela started a family and raised two sons, Edmund George (Chip) and Frederick Andrew (Fred), and a daughter, Cynthia Dené. E.G. held a standout, story book, professional career in consumer products and marketing starting out at Proctor & Gamble and Warner-Lambert, and then moving on to succeed in senior executive positions at Johnson & Johnson, American Cyanamid Company and R. J. Reynolds Tobacco Company. After leaving the corporate world, E.G. was an active business consultant and entrepreneur, and later in life, enjoyed working for Amerilife in Sarasota, where he fondly acquired the nickname ‘Sam.’ E.G. had a passion for sports, music, travel and the Jersey Shore. He was a natural athlete with a height of 6’6” and used this feature to successfully play competitive basketball and tennis. He was an avid fan of the New York Knicks, Tampa Bay Buccaneers and Tampa Bay Rays. At a young age, E.G. played the trumpet and developed a deep passion for big band music and closely followed icons such as Harry James, Tony Bennet and Frank Sinatra. E.G. and Pamela travelled the world in E.G.’s corporate days and later on countless cruise ships. E.G. deeply loved his family and wonderful grandchildren. He was preceded in death by his son, Fred. He is survived by his wife, Pam, his two children, Chip and Cynthia Vimond Brandt, his grandchildren, Cécile Marie Vimond, Blakelie Dené Vimond, Frederick Andrew Vimond Jr. (Drew), Christina Nicole Brandt and Jack Thompson Brandt, his sisters, Rosemary Collins Weber, Nancy Collins and his brother, Edward Allen Collins and their families. E.G. will also be greatly missed by his loving in-laws, Muriel Esclassan Vimond, Denise Endsley Vimond and Jason Brandt. A celebration of life for family and friends will be held in the spring of 2022. Donations can be made to the American Lung Association at: https://action.lung.org/site/Donation2.

The family of Edmund George Vimond Jr. (E.G.) created this Life Tributes page to make it easy to share your memories.