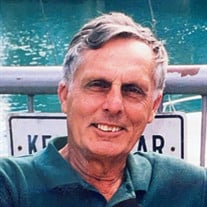 Edward L. Torcicollo (Ed), 90, of Sarasota, passed away suddenly on Thursday, June 3, 2021. He is survived by Jacqueline (Jackie), his beloved wife of 66 years, and by his daughter Lisa Torch-Massa, son Peter (Paula), grandchildren Ryan (Jess) and Jamie, and great-grandchildren Willow and Gray. He is predeceased by his brothers, Vincent and Louis. Ed was born and raised in Paterson, NJ, and was well known as a student athlete, playing basketball for Eastside High in Paterson and Panzer College in Montclair, NJ, (now Montclair State University) where he received his B.S. in Education. He also received a Masters in Education from Rutgers University. Ed taught for more than 40 years in the Union Township school system, where he coached basketball, football, and track & field. In his later career he served as the Supervisor of Physical Education for the school system. He remained very active in the athletics department at Union High School, where he continued to impress the basketball team’s players with his three-point and free-throw shooting prowess until his retirement in 1992. Ed and Jackie raised their family in Westfield NJ, where Ed was an elder at The Presbyterian Church. They retired to Siesta Key in 1992, where they became members of Church of the Palms. Ed was an avid golfer and spent many years with his wife and friends at the former Gulf Gate Golf Club, the site of several holes-in-one he made during his golfing career. An athlete and sports fan his entire life, Ed could always be found watching (and discussing) his favorite teams, the NY Giants and Yankees, and any number of college basketball and football games with his friends and family. Ed’s love and devotion to Jackie was particularly noteworthy, giving true meaning to the term “doting husband.” He also had an extremely tight connection to his children and grandchildren, who couldn’t have asked for a better or more loving father or grandfather. He taught everyone in the family how to drive (and was famous for his parallel parking lessons). He was a world-class hugger, and he was a steady hand and calming influence for the entire family. He had an encyclopedic memory and could always be counted on for his instant recall of everyone’s birthday, social security number, phone number, or for extremely detailed directions to virtually anywhere you can imagine. Most recently, he relished his new role as a “great grandpa,” and was always excited to see and hear about the newest members of the family. Ed had a profound impact on many people over the course of his life, and he was loved by many. His family, friends, colleagues and students remember him as a wonderful role model, empathetic mentor, and caring humanitarian. Services will be private, but a memorial will take place in the future. In lieu of flowers, the family has asked for donations to Running Strong for American Indian Youth, The Navigators, and Church of the Palms.

The family of Edward (Ed) L. Torcicollo created this Life Tributes page to make it easy to share your memories.

Send flowers to the Torcicollo family.