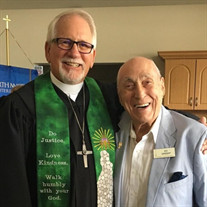 Edward Gremp passed away peacefully on Tuesday, October 19, 2021 at the incredible age of 104! He will be together again with his devoted wife Trudy Gremp who preceded him on August 5, 2017. He was a kind, honorable, hard-working man. He was proud of building his first home while working as a draftsman for his father’s steel company in Chicago. He was drafted and served in the Army. After returning home, he started his own steel fabrication business (Gaige Detail) that became Gremp Steel Company. Not only was his company thriving with 50 men in the 1940’s; but, Gremp Steel Company is still going strong today! Edward retired early to run his 1,000 acre beef cattle ranch with 15 horses. After many years of living his dream of being a cowboy, he sold the farm & moved to Sarasota with his family. He bought his 50’ yacht called “Lucky Lady” and became of member of Bird Key Yacht Club. Edward enjoyed a long life of great adventure & exceptional accomplishment. He was a Mason, 32nd Degree Scottish Rite, and member of Sahib Shriners. He helped many charities during his 73 years of service. He was an avid bandsman playing his tuba as a young man in the Army, dance halls, Shrine parades, & circuses. He sure loved giving parties, playing in his little German band, traveling the world & dancing with his wife Trudy. Most of all, he loved Corey’s cooking & going for rides singing Frank Sinatra songs with his daughter! He will be missed dearly & always loved by those who knew him or those he touched with his generosity. He is survived by his son Corey Gremp; his grandchildren Max & Cassie; his daughter Vivienne Gremp; his son Kerry Gremp; his grandchildren Randy, Kim, Lexi; his brother-in-law Carl Anderson (wife Linda); his brother-in-law’s children Sean Anderson (wife Tana & their 2 children Eliana, Shae) and Kristen Chism (husband Jeremiah & their 3 children Carolina, Corbin, Eli). Please join us in celebrating Edwardo’s life on Friday, November 5th, 2021 at 10 am at the Northminster Presbyterian Church (member 40+ yrs) at 3131 61st Street, Sarasota, FL 34243. In lieu of flowers, please send donations in honor of “Junior” his beloved cat to the Cat Depot at 2542 17th Street, Sarasota, FL 34234 or Sarasota Humane Society at 2331 15th Street, Sarasota, FL 34237.

Edward Gremp passed away peacefully on Tuesday, October 19, 2021 at the incredible age of 104! He will be together again with his devoted wife Trudy Gremp who preceded him on August 5, 2017. He was a kind, honorable, hard-working man. He was... View Obituary & Service Information

The family of Edward Gremp created this Life Tributes page to make it easy to share your memories.

Send flowers to the Gremp family.