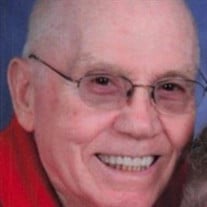 RIDGWAY, Edwin L. – of Palmetto, Florida and seasonally, Clio, Michigan, age 86, went to be with the Lord on September 22, 2021, at Medilodge of Montrose. The family will receive visitors Sunday, October 3, 2021, from 2PM until 4PM at Toale Brothers Funeral Home, 40 N Orange Ave, Sarasota Fl. Honoring his wishes, burial will take place at Sarasota National Cemetery on Monday October 4, 2021 at 10 AM located at 9810 State Rd 72, Sarasota Fl. In lieu of flowers, memorial contributions may be made to a veterans organization of choice. Edwin was born July 21, 1935, to the late Elva and Flo (Paul) Ridgway. He served in the United States Army as a Radio Operator in 1957. Later he married Martha Gretchen (Michalke) on September 4, 1962, who Edwin raised 4 children with. Gretchen preceded him in death on December 21, 2001. He met Arlene Campbell and together they were united on March 15, 2008. Edwin worked for Dickey Clay as a Foreman from the mid 60’s until retiring in 2002. His hobbies included fishing and gardening, for which he had a talent and passion - he enjoyed spending his free time caring for it and canning his produce. Above all, his family was his greatest joy in life. Surviving are: Loving wife, Arlene Campbell; Children: Debbie “Tegan” (John) Sterling, Matthew (Suzy) Ridgway, Dawn (Phil) Rodgers, Sally (Bill) Wolf; Step-Children: Danny (Betty) Campbell, Denise Campbell, Dennis (Denise) Campbell, Debbie (Paul) Rockwell, Donna Williams, and Diane (Brad) McGinnus; Grandchildren: Chelsea (Ian), Ashley (Mike), Brett, Kari, Savana, Isabella, as well as many step-grandchildren and great-grandchildren he loved as his own.

The family of Edwin L. Ridgway created this Life Tributes page to make it easy to share your memories.

Send flowers to the Ridgway family.