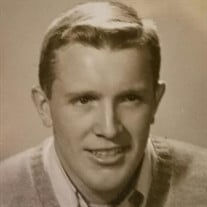 Elbert Garfield Griffith, of Siesta Key, Florida passed away peacefully at his home on May 22, 2021 at the age of 83. Elbert was born in Gallipolis, Ohio on October 30, 1937, to father Eugene Garfield Griffith and mother Opal Lucille Borrows. The oldest of two boys, El and his brother Donn loved boating, fishing, sports, euchre, The Ohio State Buckeyes, and traveling. El graduated from The Ohio State University in 1961, where he earned The Ohio State University varsity “O” letter in both soccer and tennis. He was a member of the Phi Kappa Tau fraternity where he was nominated The King of Hearts. Upon graduating El served in The United States Air Force and was stationed overseas in France and Germany where he continued his love of sports by acting as the “American Youth Activities Director” for the USAF base dependents. While in Europe, he met and married Miss Luxembourg 1961, Victorine Schoos. Upon returning to the US, El and Vicky resided in El’s hometown of Upper Arlington, where El helped to establish the Upper Arlington School’s soccer program. He continued to play tennis as well and competed in tournaments until late in life. El also helped to bring the original pro Columbus Soccer team, the Columbus Magic to central Ohio. After serving his country, El became an outstanding salesman, selling insurance for John Hancock and later computers and computer products for IBM where he won many top sales awards. El tired of corporate America and switched gears to real estate investing and farming in the early 80’s, where he, Vicky and the kids ran two large equestrian centers in Powell, Ohio for the next two decades. El was preceded in death by his parents, brother Donn William Griffith and Ex-wife Victorine Shoos Griffith. He is survived by his children Diane Kimberly Griffith, Steven Andrew Griffith, Sandra Anne DeLong (Ben), Jeffrey Eugene Griffith (Kim), and Debra Marie Shafer (Garrett); Grandchildren Justin Allen Griffith, Morgan Marie Febus, Jeffrey Tyler Febus, Madison Faith Febus, Lauren Ashley DeLong, Eric William DeLong, Kelly Larkin Saari (Aaron), Ethan Tyler Shafer, and Ryan Ellis Shafer. The family will attend a burial with military honors at Sarasota National Cemetery. A celebration of El’s life will be held later this summer in Columbus, Ohio. Details of this event will be announced at a later date. In lieu of flowers the family asks that contributions are made to The Alzheimer’s Association or Meals on Wheels of Sarasota (421 N. Lime Ave. Sarasota, FL 34237).

Elbert Garfield Griffith, of Siesta Key, Florida passed away peacefully at his home on May 22, 2021 at the age of 83. Elbert was born in Gallipolis, Ohio on October 30, 1937, to father Eugene Garfield Griffith and mother Opal Lucille Borrows.... View Obituary & Service Information

The family of Elbert Garfield Griffith created this Life Tributes page to make it easy to share your memories.

Send flowers to the Griffith family.